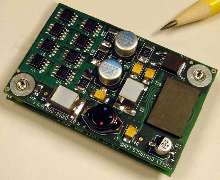 Motor Control Via CAN & CANopen

All Accelnet(TM) Micro servo amplifiers communicate with the control PC-and with each other-via a rugged twisted pair CAN data link. A low cost communications card provides the interface (modem) between bus and control PC.

The CAN bus originally proved its reliability through years of automobile use. More recently, the basic CAN network has been further enhanced with an international standard CANopen motion application layer to meet the needs of more sophisticated industrial applications. All motor commands to and from the control PC travel over the two wire bus. In addition, the network enables amplifiers to communicate directly with one another.

Copley Motion Libraries (CML) and COM Objects make system commissioning fast and simple. The development of low level code to control a CANopen network of intelligent drives is eliminated. All network management is taken care of automatically by a few simple commands linked into your application program. Even programmers with no CANopen experience can get a multi-axis application up and running quickly.

CML delivers optimal flexibility and performance. The application program can run on a PC under Windows and Linux, or on embedded microprocessor with any real time multi-tasking operating system. CMO provides optimal ease of use for applications running under the Windows operating system.

Applying power for the first time to a system involving multiple motors is often a white knuckle undertaking. Wrong or intermittent connections can cause equipment damage or operator injury. Getting the system safely up and running is referred to as System Commissioning, and the usual trauma associated with the initial application of power is now mitigated by two powerful algorithms, both provided by Copley's proprietary CME 2(TM) setup software. System commissioning and precise amplifier-motor tuning processes are compressed from days to hours. The CME 2(TM) software eliminates the traditional time consuming wire-and-try method of fault diagnosis and correction.

"I get to sleep at night," is how system managers describe CME 2(TM) software's automated commissioning benefit.

The Accelnet(TM) servo amplifier differs radically from earlier generations because it is no longer consists mostly of electronic circuits. A very substantial portion of the amplifier's price covers Copley's investment in firmware.

Accelnet(TM) Micro servo amplifiers are designed with solderless power and signal connections, and are built in PCB-mounting packages measuring 2.5 x 1.6". The amplifiers are protected against over-current, over-temperature, and incorrect operating voltages. They are further protected from short circuits between outputs, from output to ground, against over-current, over-temperature, and against incorrect operating voltages. In addition, protection circuits guard against loss of signal from either the encoder or the motor's Hall sensors. Built-in computation algorithms monitor the I2o T heating effect of load current. Based on motor self-heating information, automatic protection algorithms enable amplifiers to drive servomotors safely at their performance ceiling.

Set up is fast and simple using Copley Motion Explorer (CME 2(TM)) software operating under Windows® and communicating with Accelnet(TM) Micro amplifiers via an RS-232 link. CAN address selection is by digital inputs or may be programmed into the driver's internal flash memory.