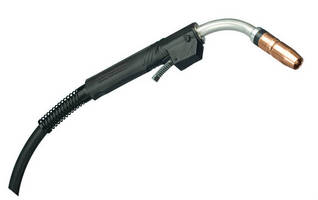 Straight-handleÂ T-Gun™ Semi-Automatic Air-Cooled MIG Gun models are rated at 350, 450, 550, and 650 A, while Compact Series features 350 A model. Product includes Double-Life MIG Gun System, so users can replace front end of gun with identical back end. Also included are aircraft-grade aluminum armored neck with insulated copper conductor tube, rated over 650 A, and heat-dissipating consumables. Unit is available with power cables in 10, 12, 15, 20, 25 ft, and custom lengths.


BEECHER, Ill. – To meet the demands of heavy-duty welding applications, Bernard offers its T-Gun™ Semi-Automatic Air-Cooled MIG Gun. This durable, straight-handle welding gun can be built to order online to ensure users have the features they need to weld in even the harshest and most abusive environments. Users simply answer a series of questions related to amperage, cable length, neck style and more at BernardWelds.com/configuremygun to customize their own T-Gun Semi-Automatic Air-Cooled MIG Gun.

In addition to its customizable features, this welding gun includes an exclusive Double-Life MIG Gun System, which allows users to flip-flop the front end of the gun when it becomes worn, replacing it with the identical back end to extend the life of the product. The T-Gun Semi-Automatic Air-Cooled MIG Gun also features an aircraft grade aluminum armored neck with an insulated copper conductor tube (rated over 650 amps) to prevent overheating even after continuous use. Two spare leads, as well as a free control plug (excluding dual schedule models) and power pin are standard with the welding gun.

Another time-saving option on the welding gun is the QUICK LOAD™ Liner, which requires less than half the time and effort to replace compared to conventional-style liners. This two-piece system installs from the front of the welding gun after the user installs a retainer inside the power pin on the first use. Users may also choose to use the QUICK LOAD Liner AutoLength System in conjunction with the QUICK LOAD Liners. This spring-loaded module sits inside the power pin to apply constant pressure on the liner, keeping it seated properly in the retaining head and helping to minimize wire-feeding problems associated with incorrect liner length.