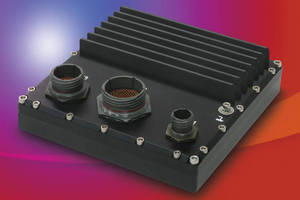 Using platform location monitoring built into on-board FPGA to recognize its physical location within platform, A175 EMC-/EMI-protected Remote Interface Unit (RIU) I/O expansion subsystem communicates with main mission computer. RIU provides dynamic mission profile reprogramming by being able to alter functionality on-the-fly or at power up. Measuring 7 x 7 x 1.3 in. and weighing 2.5 lb, subsystem draws 10 W of power and enables one hardware unit to be used for both port and starboard.

The subsystem uses platform location monitoring built into the on-board FPGA to recognize its physical location within the platform and communicate with the main mission computer, allowing the unit to alter its functionality 'on-the-fly' or at power up.

Doug Patterson, VP, Military and Aerospace Business Sector for Aitech, said, "This remote interface functionality is typical of port and starboard avionics platforms, where it's most desirable to utilize the exact RIU hardware in multiple areas of the platform to minimize platform logistics and R&O (repair and overhaul) costs."

Patterson continued, "The RIU's monitoring of key engine parameters, wing root loading, fuel levels, transmission and drive train vibration loading, APU (Auxiliary Power Unit) loads, weapons pods and other critical functions are generally repeated on the aircraft sides. The unique platform location monitor in the A175 enables only one hardware unit to be used for both port and starboard, lowering overall development and long-term logistics and maintenance costs."

Also classified as a data concentrator unit (DCU), the A175 optimizes SWaP (size, weight and power) with dimensions of only 7" x 7" x 1.3" and a weight of less than 2.5 lbs (the approximate weight of one 6U conduction-cooled VMEbus board), while drawing only 10 W, or about the same as a standard household incandescent nightlight.

Applications that benefit from the A175's durable, compact construction and highly flexible functions include manned and unmanned vehicles such as wheeled, tracked ground units as well as tactical fixed and rotary wing aircraft. In addition, subsurface naval ships as well as above and below deck implementations on naval surface ships benefit from this reliable MIL-STD subsystem.

A large variety of I/O interfaces and large user-programmable FPGA for the application OFP (Operational Flight Program) makes the A175 useful in highly data centric environments such as a remote interface data concentrator or engine and power train data monitor as well as in vehicle prognostics data collection and condition based maintenance (CBM).

Other functions include an internal elapsed time data recorder and internal temperature sensor for high integrity, mission critical subsystems. Units have been qualified for manned aircraft use with added gunfire vibration and high shock.

The A175 operates from -40°C to +71°C with natural convection cooling and is powered from a standard 28 VDC input per MIL-STD-740D. In addition to EMI protection, endurance against shock, vibration and acceleration per MIL-STD 810F as well as extreme resistance to altitude, humidity and temperature are ensured by the subsystem's rugged Faraday cage design.

Pricing starts at $7,500 in OEM quantities with immediate delivery from stock to eight weeks ARO.

Applications for its products range from mission processors, fire control, mission control and autonomous robotic subsystems for ground vehicles as well as surface and subsurface naval platforms to tactical and strategic fixed- and rotary-wing aircraft, and low- to high-earth orbit and deep space vehicles.
Share