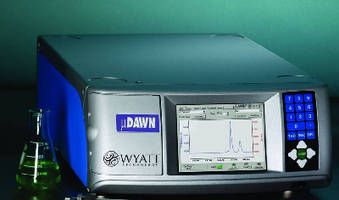 The µDAWN is the world’s first multi-angle light scattering (MALS) detector that can be coupled to any UHPLC system in order to determine absolute molecular weights and sizes of polymers, peptides, and proteins or other biopolymers directly, without resorting to column calibration or reference standards. Wyatt Technology’s µDAWN connects to the Optilab® UT-rEX™, the first refractive index detector for UHPLC. Refractive index detection is a critical component of any UHPLC-SEC-MALS system, so the µDAWN plus UT-rEX equals a winning combination that transfers the many benefits of SEC-MALS analysis to the realm of UHPLC for the very first time.

In order to accommodate the narrow peaks produced by UHPLC separation, Wyatt Technology’s µDAWN engineers reduced the conventional light scattering flow cell volume from 63 µL to fewer than 10µL. More importantly, a remarkable improvement was achieved in minimizing interdetector mixing; the band broadening between the µDAWN MALS and Optilab UT-rEX detectors was brought to under 7 µL, while the band broadening between the UHPLC’s UV detector and the µDAWN detector is a mere 2 µL! As a consequence of the reduced cell volume and interdetector band broadening, a µDAWN/UT-rEX system can accurately analyze the molar mass and size of UHPLC peaks without loss of resolution.

Reduction in the cell volume of a MALS system can create significant technical difficulties due to the increased proximity of the laser beam to cell/sample interfaces. This closeness leads to higher levels of stray light which can compromise instrument sensitivity.  Innovations in the µDAWN’s detection optics and mechano-optical train not only maintain the sensitivity level but actually exceed that of Wyatt’s popular miniDAWN TREOS MALS detector.

Further expanding the versatility of the µDAWN is the WyattQELS™ Dynamic Light Scattering (DLS) module. This embedded accessory measures DLS in the µDAWN flow cell simultaneously with MALS acquisition, computing hydrodynamic radii “on-the-fly”. And finally, the µDAWN user experience is augmented by its color touchscreen front panel display which shows the chromatographic conditions, instrument diagnostics, and much more.

Based in Santa Barbara, California, Wyatt Technology is the world’s leading provider of instruments for absolute macromolecular and nanoparticle characterization. With over 40 years’ experience developing multi-angle light scattering detectors, working with customers in the biotechnology, chemical, petrochemical, pharmaceutical, academic and government arenas, Wyatt prides itself on its entrepreneurial spirit, and the uniqueness of its offerings. The Company’s groundbreaking technology and uncompromising levels of customer care make Wyatt the global hallmark in its field. For more information, please visit www.wyatt.com