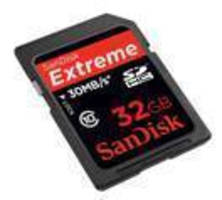 Intended for users of DSLR cameras, 32GB SanDisk ExtremeÂ® SDHC(TM) card offers 30 MBps read/write speeds and adheres to SD Association's Class 10 specification. Its sustained write speed is fast enough to ensure HD video recording, while capacity can handle storage of up to 160 min of full HD (1,920 x 1,080) at 24 Mbps data transfer rate or up to 2,500 RAW images. Solution operates over -13 to +185Â°F range.

"The market for entry to mid-level DSLR cameras is growing, and SDHC is becoming the de-facto card format for these devices," said Susan Park, director, retail product marketing, SanDisk. "Our card's 32GB of storage and up to 30MB/s read & write speeds enable DSLR users to shoot without worrying about storage or speed limitations. SanDisk Extreme SDHC cards provide consumers with a more enjoyable user experience, letting them focus on what is really important - the images that they are capturing."

A memory card's write speed plays a crucial role in the overall system of the camera when taking pictures in rapid succession. If a card cannot process data quickly enough then the burst mode shooting may pause unexpectedly as the card catches up to the camera. Burst mode bottlenecks can lead to missing "the" shot, especially at sporting or other fast-motion events. The SanDisk Extreme SDHC card offers maximum data-transfer rates, giving consumers a memory card fast enough to unlock the full capabilities of their DSLRs.

Recently-released DSLR camera models like the Nikon D90 and D5000 offer consumers the ability to record HD videos, producing large files that can fill lesser-capacity cards quickly. Today's high-megapixel DSLRs also can generate massive still images like those produced in the RAW format used by professional photographers who want to take advantage of the enhanced picture quality and flexibility that RAW allows during post production.

RAW images demand up to ten times as much storage space as regular JPEG images, and when taken in rapid succession during burst mode can quickly fill smaller storage cards. The 32GB SanDisk Extreme SDHC card can store up to 2500 RAW3 images, providing photographers with piece of mind and confidence that they will not run out of space for their images.

When placed in SanDisk's new ImageMate® Multi-Card USB 2.0 reader/writer, the SanDisk Extreme SDHC card transfers images and video to a computer at rates of up to 30MB/s. The card's fast data transfer rates enable photographers operating under tight deadlines to maximize critical workflow and enter post production as quickly as possible.

An SD(TM) card's speed Class is based on its minimum data-transfer rate, and is used to ensure high-quality video recording standards. The SD Association added Class 10 as part of the SD 3.0 specification released earlier this year. The SanDisk Extreme SDHC card's performance exceeds the requirements of even the highest-quality AVCHD video recording device, and is currently the fastest Class 10 card in the world.

SanDisk Corporation is the global leader in flash memory cards - from research, manufacturing and product design to consumer branding and retail distribution. SanDisk's product portfolio includes flash memory cards for mobile phones, digital cameras and camcorders; digital audio/video players; USB flash drives for consumers and the enterprise; embedded memory for mobile devices; and solid state drives for computers. SanDisk (www.sandisk.com/corporate) is a Silicon Valley-based S&P 500 company with more than half its sales outside of the United States.

2 Based on SanDisk internal testing; performance may vary depending upon host device. 1 megabyte (MB) = 1 million bytes.