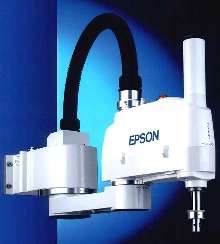 "0.38 second cycle times! 0.008 micron repeatability! 0.12 Kgm² moments of inertia! Table top, side wall, shelf top, shelf bottom and ceiling mounts! Class 10 Cleanroom and ESD compliant! 32 different models available! UL Listed! It's pretty obvious that once again Epson is demonstrating its leadership in SCARA robots," said John Clark, the National Sales Manager of Epson America's Factory Automation Robotics Division. "A couple of years ago we asked our customers, as well as our competitors' customers, to describe their ideal SCARA robot. They told us that they wanted it to be faster, more repeatable, have stronger moments of inertia and the ability to mount almost anywhere. They also wanted easy to use programming software running on a compact, open architecture, PC based controller." John concluded, "The E2 Robot is exactly what they described."