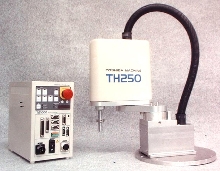 TH250 and TH350 feature absolute encoders as standard dispensing with need for home return function. They offer payloads up to 3 kg and repeatability of +/-0.01 mm. Built-in PLC controls I/O equipment regardless of robot operation and program. Robots can be programmed using ladder sequence program, and can optionally feature Ethernet, DeviceNet, or Profi-bus connectivity. Optional teach pendant can be used to direct robots through sequence of movements.

ELK GROVE VILLAGE, IL (April 30, 2002) - Toshiba Machine has released two new SCARA robots, the TH250 and TH350, which provide better accuracy and repeatability than existing SCARAs, and offer quicker cycle times and faster motion. Both SCARAs feature absolute encoders as standard dispensing with the need for a home return function. The TH250 and TH350 feature top-level speed, payloads of up to 3kg and repeatability of ±0.01mm. These robots are suited to applications in the handling of small components, such as electrical, precision and mobile phone parts, assembly and test equipment.

Both robots feature a built in PLC, which, regardless of robot operation and program, can control I/0 equipment. The TH250 and TH350 robots can be programmed using a ladder sequence program and, as an option, can feature Ethernet, DeviceNet or Profi-bus connectivity. A further option is the Toshiba Machine teach pendant, an external switch pad that can be used to direct the robot through a sequence of movements.

These new additions to the existing range will mean that Toshiba Machine has amongst the largest range of mechanical arms on the market. The range will now extend from the TH250 and TH350, which have arm lengths of 250mm and 350mm respectively, and the general purpose SCARAs with arm lengths between 420mm and 1050mm, to the large palletizing SCARAs, with a 1950mm arm length and a payload capacity up to 70kgs. Further options include Clean Room Class 10, for use in pharmaceutical or electronic manufacture, and ceiling mounting.