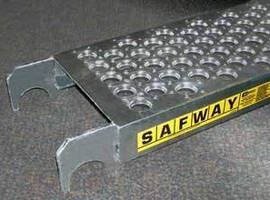 Designed to fit Safway's Systems(TM) Tube and Clamp and Sectional Scaffold, Systems(TM) Steel Sand Blast Plank features large perforations to prevent grit from building up on scaffold walkways during sand blasting. Side rail is crimped shut to prevent debris from accumulating within U-shaped rail found under plank, on each side rail. Featuring galvanized, all-steel welded construction, plank ranges in length from 2-10 ft and resists rust in harsh environments.

WAUKESHA, Wis. - Safway Services, LLC is introducing a new Systems(TM) Steel Sand Blast Plank developed to reduce debris accumulation on walking surfaces. Designed to fit Safway's Systems(TM), Tube & Clamp and Sectional Scaffold, the Sand Blast Plank features large perforations to prevent grit from building up on scaffold walkways during sand blasting. The plank's perforations also help to remove excess dirt and sand from work boots. In addition to the plank's perforated surface, the side rail is crimped shut to reduce sand, dirt and water accumulation. This crimped rail prevents debris from accumulating within the U-shaped rail traditionally found under the plank, on each side rail. "We're excited to reveal this innovative new plank as a solution for our customers who use scaffold while sandblasting." said Stig Karlsen, vice president of Engineering Services with Safway. "The plank was specifically designed to provide a cleaner work environment," The plank's galvanized, all-steel welded construction is durable and resists rust in harsh environments, making it ideal under a variety of working conditions. The planks range in length from two to 10 feet and are compatible with Safway's SSP solid surface steel planks. About Safway Services, LLC
Founded in 1936, Safway Services is headquartered in Waukesha, Wis. Through its network of approximately 85 branch locations in the U.S. and Canada and a system of distributors across South America, Safway provides scaffolding and access solutions for commercial construction, industrial and infrastructure applications. As an industry leader, Safway provides sales, rental, labor services, training, engineering, design, safety and project management. With an extensive inventory and a full line of access products, Safway experts design and implement safe, economical access solutions for projects of any size and scope. For additional information, visit www.safway.com 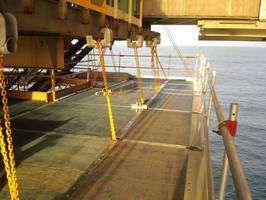