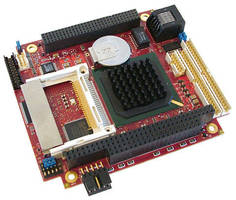 Len Crane, President of VersaLogic, noted, "The Manx provides a great migration path for existing customers, or an opportunity for new customers to realize the benefits of a moderately priced x86 CPU board with very low power draw."

As with other VersaLogic embedded computer boards, the Manx features a Phoenix Software (formerly General Software) reprogrammable BIOS which supports custom defaults and the addition of firmbase security applications, remote booting, and other pre-OS software functions. The Manx is fully RoHS-compliant and compatible with a variety of popular embedded operating systems, including Windows CE/XP, Linux, VxWorks, and QNX.

Customization of the Manx is available, even in low OEM quantities. Options include conformal coating, BIOS customizations, revision locks, custom labeling, high-G shock and vibration treatment, custom testing and screening, etc. The Manx will be available in production quantities in June. Pricing is about $550 in OEM quantities.

For additional information contact VersaLogic Corp. at (541) 485-8575 or info@versalogic.com, or visit the on-line catalog at www.VersaLogic.com.

A leading supplier of industrial computers since 1976, VersaLogic focuses on high-quality board-level products for embedded OEM applications. Its five year product availability guarantee and outstanding warranties demonstrate a commitment to service. Product platforms include EBX, PC/104, PC/104-Plus, EPIC, SUMIT, and SPX(TM). VersaLogic has received the coveted Platinum level vendor rating from VDC Research Group, Inc., for five consecutive years. VersaLogic is ISO 9001:2008 certified and was one of the first companies in North America to be registered to the 2008 standard.