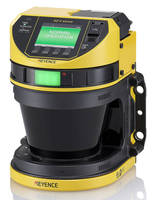 Overview
Keyence Corp. of America has redefined safety laser scanners for a second time.  Several improvements can be found in the new SZ-V Series but multiple innovations were also achieved, making it unlike anything else in the industry.

Industry Firsts
In addition to the SZ-V now having the longest protection range in the industry at 8.4m (27.56´), its most surprising innovation is the integration of a camera directly into the unit. The camera further simplifies installation and can even capture images & video when an object or person enters the protected area.

The SZ-V also has a detachable display that provides real-time feedback, protection zone information and even access to historical data, all without interrupting the scanners operation

Additional Features
Additional features include a system memory plug, network compatibility such as EtherNet/IP, and the ability to receive encoder inputs.  Series connecting up to three units together is also possible with the SZ-V, greatly reducing the necessary wiring.

Environmental Resistance
Enhancements to both the laser and how the signal is processed allow for the unit to stably differentiate between people/objects and dust or mist. The SZ-V features the industry´s smallest beam pitch at 0.1°, allowing for 4X the number of beams over the same area as a conventional scanner. This, along with a beam spot reduced by 1/3, provides unmatched stability in any environment.

The SZ-V Series is another example of a Keyence innovation that not only pushes the envelope for a particular product but redefines its possibilities.