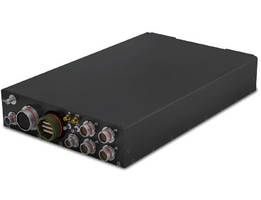 S402-LC/SW Server System is designed based on the Xeon® E5 server CPU and consists of server, multi-port switch, network attached storage and optional router. Suitable for defense, mil/aero, industrial, and commercial applications, system is operated over a temperature range of -40°C to +85°C. Featuring 11.75 x 7.75 x 2 in. chassis, product supports four removable SATA drives and NVMe PCI Express drives and comes with up to 32 TB of removable storage and ECC-protected RAM.

Based on the Intel Xeon® E5 server CPU, the S402-LC/SW’s ultra-efficient engineering design yields the highest performance with the greatest efficiencies in size, weight, and power (SWaP) in a small, cost-effective, conduction-cooled system

The highly integrated server system is the result of more than 40 years of GMS electro-mechanical engineering. The system consolidates multiple separate system functions onto a single internal computer board, yielding a single-chassis multi-functional server system at a price point that is unheard of for deployable rugged defense systems. Designed for cost and space reduction, the S402-LC/SW server system is the smallest rugged enterprise-class server ever deployed.

Developed for the low-cost and reduced-size needs of the U.S. Army’s Product Manager Mine Resistant Ambush Protected Vehicle Systems (PdM MRAP VS) and with the Army’s Night Vision and Electronic Sensors Directorate (NVESD), the S402-LC/SW is a compact standalone or networked “mobile battlefield data center” that is designed to operate over -40° C to +85° C with no fans required.

The meticulously value-engineered S402-LC/SW server system replaces several separate systems previously used by the Army in an MRAP mine-clearing vehicle - including a larger, previous-generation GMS SO302 server, Ethernet switch, and mass storage. The S402-LC/SW meets the challenge of combining multiple chassis and functions into a single, small, conduction-cooled server to fit into a very tight space in the vehicle - at a price point roughly one-third of the previous separate chassis and functions. The S402-LC/SW is the successful result of achieving that goal: a commercially available version of the Army’s new “mobile battlefield data center” server.

“No one else has this kind of server - absolutely no one,” said Ben Sharfi, CEO and chief architect of GMS. “Our S402-LC/SW is unlike anything on the market, giving military and industrial customers the same high-performance computing that consumers get with Apple’s highest-performing desktop computer. The S402-LC/SW is a fully sealed, enterprise-class mobile data center that is ready for battlefield duty, and small and rugged enough for the most demanding environments. Most importantly, it saves the Army lots of money.”

The S402-LC/SW is ideal for defense, mil/aero, industrial, and commercial platforms that need maximum performance density in an exceptionally small space. The 11.75" x 7.75" x 2" chassis can mount nearly anywhere in battlefield platforms used on the ground, in the air, or on the sea. It can also be mounted on telephone poles and powered by solar panels. Because of its server-class performance, significant networking options, exceptional I/O capabilities and removable storage, the S402-LC/SW is also ideal for demanding industrial and commercial platforms.

Due to efficient engineering and packaging, the S402-LC/SW is a single product with two variants. The S402-LC (“LC” for low cost) eliminates the Ethernet switch to reduce cost while including two 10 Gbit and one 1 Gbit Ethernet ports for no-compromise server processing and storage. The S402-SW (“SW” for switch) variant includes all the system’s features, including the low-latency intelligent Ethernet Layer 2/Layer 3 switch and four 10GbE and thirteen 1GbE ports. The network is capable of sub-30 ms video frame rates using GigE Vision - a video-over-IP standard for Ethernet.

The single-chassis S402-LC/SW has everything built inside, right down to the MIL-STD-1275-conditioned power supply and front-panel military-style 38999 connectors. The S402-LC/SW is designed to simplify local and networked data processing tasks that require an ultra-fast 18-core Intel Xeon server CPU, with up to 256 GB of DDR4, ECC-protected RAM, and up to 32 TB of removable storage in one ultra-rugged chassis. The S402-LC/SW supports four removable SATA drives as well as four extremely fast, removable, and securely erasable NVMe PCI Express drives that are substantially faster than SATA SSDs. NVMe drives make direct “sensor-to-storage” a reality in defense systems.

The standard S402-LC configuration includes two 10GbE and one 1GbE ports and a serial, audio, and video console interface with secure crypto and sanitize/zeroize features. Add-in I/O enables users to personalize the system via PCIe-Mini cards, an XMC, or GMS SAM I/O™ cards. When equipped with the optional intelligent Ethernet Switch, the full-featured S402-SW configuration has four 10GbE ports and thirteen 1GbE ports that create an extremely dense yet compact server/router/switch/NAS subsystem that weighs only about 10 lbs.

A version of the S402-SW created for the Army accommodates low latency video-over-IP from cameras or sensors that is streamed to the drives over Ethernet and sent back out over Ethernet in real time to GMS SmartView™ panel PC displays, turning the S402-SW into a battlefield surveillance and SIGINT recorder in a ground vehicle. Video is processed through the server in less than a video frame (sub-30 ms latency) so that operators can “drive” the MRAP using only the screens without becoming nauseous. This level of performance is the result of extensive GMS engineering effort.

The S402-LC/SW system can be ordered from GMS with operating systems such as Windows® or Linux® pre-installed, along with hypervisors from VMWare®. Enterprise-class software routers from Cisco® are also available. Single- and multi-node NetApp® software-defined storage (SDS) support is imminent.