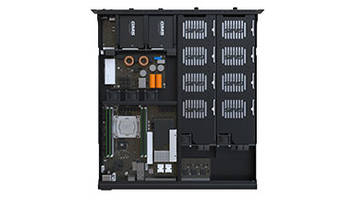 The “Hurricane” Can Replace 12 to 24 Separate Computers With Removable Encrypted RAID Storage in only 1U, with Software Certified “Trusted” By NSA, DoD

In a world full of cyber-security dangers that threaten the safety of soldiers and civilians alike, every user and application on the battlefield needs to protect classified data and ensure that critical systems aren't compromised in any way. To solve these dual problems, General Micro Systems, Inc. (GMS) today announced a thin 1U rackmount secure storage server with removable, hardware-encrypted RAID modules that also serves up to 12/24 trusted and segregated thin clients with the highest levels of security, encryption and crypto key control available. Equally important is the secure storage server’s best-in-class performance—the only rugged server to marry five leading-edge technologies together in one secure high-speed storage system.

The “Hurricane” S1U401-SHS Secure High-Speed Storage Server is ideal for the Navy’s and Marines’ shipboard op centers and command/control; the Army’s multi-domain battlefield and command networks; and the Air Force’s airborne C4ISR platforms, all of which require the most secure and highest performing technologies in the smallest yet most rugged form factors possible.

“The Hurricane secure storage server is five exceptional systems in only 1U.” said Ben Sharfi, CEO and chief architect, GMS. “There is dual cartridge RAID mass storage and hardware encryption, plus Intel’s best PCI Express Gen 3, 22 core Xeon® E5 server CPU, along with a segregated Ethernet thin client LAN server for trusted clients. It's simply the best of the best for rugged, space-constrained applications, and at a lower cost than many would pay for the just the server alone.”

In addition to the server’s individual features, the overall S1U401-SHS system with RAID drive cartridges is ideal for collecting and storing over 160 TB of secure data via 20 encrypted and RAID-capable drives.

“Although S1U401-SHS has 20 solid-state drives and 14 to 26 Ethernet ports, it is not a network attached storage (NAS) device, which operates at relatively slow network speeds,” Sharfi added. “Instead, this high speed secure storage server, which has the encrypted drives closely coupled to the CPU, its four times faster than the network connections. This allows the system to act on the data if needed for analysis or processing without slowing down the system throughput.” Compared to competing storage products such as CheetahRAID®, Hurricane S1U401-SHS is a more compact solution, offering more functionality per rack shelf with higher internal total system throughput.

General Micro Systems (GMS) is the industry expert in highest-density, modular, compute-intensive, and rugged small form-factor embedded computing systems, servers, and switches. These powerful systems are ideal for demanding C4ISR defense, aerospace, medical, industrial, and energy exploration applications. GMS is an IEC, AS9100, NIST-800-171, and MIL-SPEC supplier with infrastructure and operations for long-life, spec-controlled, and configuration-managed programs. Designed from the ground up to provide the highest performance and functionality in the harshest environments on the planet, the company’s highly customizable products include GMS RuggedDNA™ with patented RuggedCool™ cooling technology, plus the SecureDNA™ security suite for zeroizing data with Source-Safe™ BIOS control. GMS is also the leader in deployable high-end Intel® processors and a proud Intel® partner since 1986. For more information, visit www.gms4sbc.com