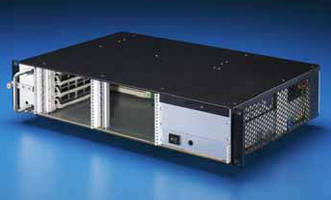 Offering up to 4 slots, VME64x SlimBox enclosure is 2U high, 19 in. wide, and 300 mm deep. Backplane comes with active or passive termination and provisions for one or 2 pluggable 47-pin PSU connectors. Hot swappable AC or DC power supplies to 250 W are standard, and other power options are available. Along with optional rear I/O, enclosure offers integrated ESD and EMC protection. Header is provided for system management options with SYSReset, SysFail, ACFail_PS, and Ground signals.


Waterloo, Ontario - Pixus Technologies, a supplier of backplane, enclosure, and embedded component solutions, has announced a new 2U VME64x enclosure in the SlimBox style, allowing up to 4 slots. The backplane comes with pluggable 47-pin PSU connectors in one monolithic 9U-long horizontal mount backplane.

The 2U VME64x SlimBox features integrated ESD and EMC protection in a rugged enclosure. The chassis are 2U high by 19" wide by 300mm depth and have optional rear I/O. Hot swappable AC or DC power supplies to 250W are standard. Other power options are also available.

Pixus Technologies' 9U monolithic VME64x backplanes come with active or passive termination and provisions for one or two 47-pin PSU connectors. A header is provided for system management options with SYSReset, SysFail, ACFail_PS, and Ground signals. The backplane also has provisions to work with Pixus' mini alarm cards.

Pixus also offers VME64x chassis in 1U and 4U SlimBox versions, as well as vertical-mount enclosures in 4U, 7U, 8U, 9U, and larger heights. The company has a wide range of VME64x backplane slot sizes in 6U, 6.5U for increased power, and 9U monolithic versions. VME, CompactPCI, and OpenVPX backplanes are available as well.

Pricing for Pixus Technologies' SlimBox VME64x enclosures starts under $1000.00 depending on size, configuration and volume. The lead time is 2 to 4 weeks ARO.