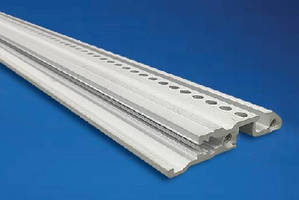 
Waterloo, Ontario  —  Pixus Technologies, a provider of embedded computing and enclosure solutions, now offers an Enhanced Horizontal Rail that is thicker and stronger for higher board insertion forces.

In OpenVPX and other high insertion force systems, the extreme board force can cause many standard horizontal rails, which provide the frame of the enclosure, to bend or crack.  The new Pixus rails feature a thicker contact point and hardened design to protect against the extreme forces.

Designed for modularity, the Rittal™ brand horizontal rails offered by Pixus meet IEC 60 297-3 and IEEE 1101.10 specifications. The rails have a .1 HP (horizontal pitch) hole pattern to allow the precise installation of guide rails in various increments.  The rails are standardly 84 HP without machining on the end faces, and Pixus offers them cut in any length.

Combined with Pixus' rugged OpenVPX IEEE handles, the company offers a full ruggedized injection/ejection solution for high insertion force systems.  The IEEE handle features a metal insertion claw that does not wear down or break over time.

Leveraging over 20 years of innovative standard products, the Pixus team is comprised of industry experts in electronics packaging. Founded in 2009 by senior management from Kaparel Corporation, a Rittal company, Pixus Technologies' embedded backplanes and systems are focused primarily on  ATCA, OpenVPX, MicroTCA, and custom designs. Pixus also has an extensive offering of VME-based and cPCI-based solutions.   In May 2011, Pixus Technologies became the sole authorized North and South American supplier of the electronic packaging products previously offered by Kaparel Corporation and Rittal.
Share