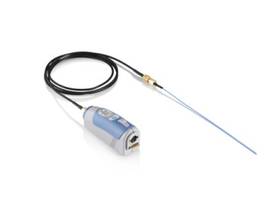 The R&S RT-ZPR20 is a new, extremely low-noise power rail probe with a bandwidth of 2 GHz. Its 1:1 attenuation also ensures very good sensitivity. The large offset range of ± 60 V permits analysis of the smallest disturbance signals during power integrity measurements, even on DC power supplies with a high voltage level. The probe also features an integrated high-precision DC voltmeter.

The quality of the power supply is a key factor in the functionality and performance of sensitive electronic circuits. Disturbance signals on the DC power supply network can lead to EMC problems or impair the functioning of a circuit. This is particularly critical for Internet of Things (IoT) components with fast digital interfaces, as well as for fast memory chips and highly sensitive analog circuits.

To assess the quality of the power supply for such components, Rohde & Schwarz is launching the R&S RT-ZPR20 power rail probe. The R&S RT-ZPR20 is designed for power integrity measurements in combination with the R&S RTE and R&S RTO2000 oscilloscopes from Rohde & Schwarz. The large 2 GHz bandwidth ensures that even very broadband disturbance signals are captured.

With its exceptionally low inherent noise and an attenuation factor of 1:1, the R&S RT-ZPR20 probe enables highly sensitive measurements. Users can measure and analyze in detail even small disturbance voltages using the many functions offered by Rohde & Schwarz oscilloscopes, such as the powerful spectral analysis. Thanks to the dynamic range of ± 850 mV and unique large DC voltage offset range of ± 60 V, the scope of applications is very large.

The R&S RT-ZPR20 also features an integrated high-precision DC voltmeter that allows users to simultaneously measure a power supply's DC component, irrespective of the offset voltage. This reading and the signal voltage are transmitted to the oscilloscope and displayed. This allows the DC level and ripple to be measured in parallel when qualifying power supplies for highly sensitive electronic components such as CPUs and FPGAs. Users see at a glance whether the ripple voltages lie within the often very tight power supply tolerances.

The R&S RT-ZPR20 2 GHz power rail probe - presented to the public for the first time at DesignCon 2017 in Santa Clara, California on February 1 and 2, 2017 - can now be ordered from Rohde & Schwarz. Deliveries will start within the first quarter of 2017. The R&S RT-ZPR20 extends the broad portfolio of active, passive and current probes for Rohde & Schwarz oscilloscopes to cover a wide variety of power electronics applications. For more information, visit: www.rohde-schwarz.com/ad/press/powerelectronics.