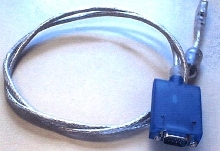 US232 cable lets RS232 serial devices, such as old printers and bar code readers, connect to newer USB PCs. Based on FTDT's single chip FT8U232AM USB UART IC for transferring serial data over Universal Serial Bus, and Sipex SP213EHCA as its RS232 level converter, cable can support RS232 rates of up to 460 Kbaud. It comes with blue housing and Windows 98/2000/XP, Linux and iMAC drivers.

Fairport, New York. US232 is a ready-made cable solution for allowing RS232 serial devices to talk to newer USB PC's. The cost-effective US232 is based on FTDT's single chip FT8U232AM USB UART i.c. for transferring serial data over the Universal Serial Bus. With an attractive blue housing, US232 cable can be used on its own to upgrade RS232 devices to USB with minimal development time and cost.

Many manufacturers of serial peripherals wish for a way to painlessly convert those products to USB. Using a dedicated USB microcontroller usually means extensive firmware development, as well as having to source or develop specific USB drivers for Windows '98/2000/xP and iMAC. Ready-made cables often have drivers which don't work everywhere. For older RS232 devices (and there are a lot of them: printers, barcode scanners, densitometers, and general serial products) FTDI's US232 cable solution with its royalty-free software drivers functions like a dream, and makes updating an old device a piece of cake - just ship the legacy device with an extra part - US232 cable! Some who've tried US232 cable with their old serial devices such as instrumentation, barcode readers, wireless devices, etc. have actual comments like: "Received US232 cable today, and five minutes later I was up and running with my USB test program - that was easy!" or "US232 cable worked beautifully - a breeze to install." US232 is a compact USB <=> RS232 0.5m cable in an attractive ice-blue translucent enclosure which uses the enhanced Sipex SP213EHCA as its RS232 level converter, so it can support RS232 baud rates of up to 460kbaud.

If later you want to build the FT8U232AM i.c. into your legacy product, it's almost as easy as replacing the RS232 level-shifter i.c. with FT8U232AM. US232 is available now from stock from $39 (qty 1) including free Windows '98/2000/xP, Linux and iMAC drivers from Saelig Company NY