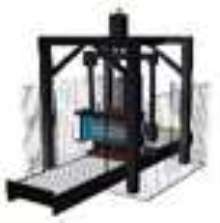 This rotary tower wrapper offers producers increased marketability by billboarding brand on pallets during transportation on flatbed trailers, in stores and on job sites. Pallets are conveyed onto the RTAC-Series from a palletizer or via forklift. The pallet load is indexed, and the wrapping sequence occurs. During the wrapping process the banner applicator applies a printed banner displaying your company logo or message around the perimeter of the pallet and seals the tail of the banner film to the load. Once the wrapping sequence is complete, the TIE-GR film tail capture mechanism eliminates film tails and secures the load to the skid.

Ideal for high-speed production lines, the INFRAPAK RTAC-Series features a rugged arm tower rotation drive system for increased safety and support of the tower at high speeds. Other features include a user-friendly operator controls and Steel-It paint that provides durable scratch resistant to the surface. The INFRAPAK RTAC-Series is part of a robust line of stretch wrapping equipment designed to maximize stretch film usage while ensuring the very best load unitization.

About The Arpac Group

The Arpac Group specializes in manufacturing heavy-duty, standard and custom-designed packaging systems that meet the needs of a broad range of industrial users. All machinery is sold and serviced by The Arpac Group's international network of distributors and service technicians. Located near Chicago's O'Hare International Airport, The Arpac Group maintains sales offices throughout the United States and selected countries worldwide.
Share