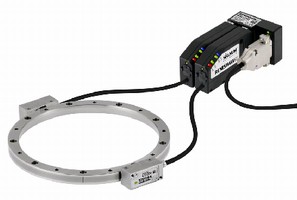 Precision rotary axes often demand very high accuracy without calibration or error-map compensation. As a modular solution, DSi adds a second readhead at 180° opposition, which eliminates odd error harmonics including eccentricity and compensates for the effect of bearing wander. By combining the incremental signals from the two readheads and using patented reference mark processing, the DSi appears to the controller as a single very high accuracy encoder.

DSi provides the angularly repeatable and customer located propoZ(TM) reference (index) output, which is completely unaffected by bearing wander or power cycling. The customer selects the desired propoZ(TM) reference position by driving the axis to the chosen angle and simply pressing a button. This feature makes alignment of the encoder's reference position to the T-slots on a machine tool rotary table, for example, faster and more precise. The selected angle is then stored in the DSi's memory so the patented propoZ(TM) reference (index) is locked to that angle, ensuring perfect angular repeatability, even if the center of rotation of the axis moves while the DSi is switched off.

Like the rest of the Renishaw SiGNUM(TM) encoder range, DSi is capable of operating at speeds up to 4,500 rev/min and temperatures up to 85°C. SiGNUM(TM) also benefits from rugged IP64 sealed readheads, dynamic signal processing for excellent reliability, and ultra-low cyclic error (<±40 nm). In addition, comprehensive SiGNUM(TM) software enables optimum set-up and real-time diagnostics via a PC's USB port.

As with all Renishaw products, the SiGNUM(TM) range is backed up by a worldwide team offering truly responsive global support.