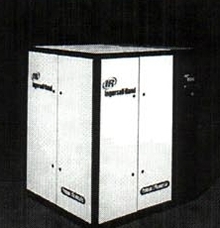 WOODCLIFF LAKE, N.J, November 4, 2001 - Continuing to set the benchmark for innovative compressed air systems, Ingersoll-Rand Company (NYSE: IR), a leading diversified industrial firm, today announced that its Air Solutions business unit has introduced an advanced rotary air compressor that will enable businesses to reduce their energy consumption and costs by a minimum of 28% during the unit s operating life.

Known as the Nirvana" air compressor, the new Ingersoll-Rand unit is the first to feature a Hybrid Permanent Magneto (HPM) synchronous motor, an emerging technology that delivers significant customer benefits including increased efficiency and reliability. Currently being used in broad industrial applications such as operating elevators and powering hybrid electrical vehicles and generators, the HPM motor has been shown to dramatically minimize energy consumption.

According to the U.S. Department of Energy, industrial air compressors consume 90 billion kWh/year of electricity, which is between 10 and 12 percent of all industrial energy used in the United States. This accounts for more than $4 billion in expenses for businesses and substantial demand on already overburdened public utility grids, resulting in a great market demand for energy-efficient air compressors.

With fewer components to wear out, leak, or get out of alignment, the Nirvana compressor offers increased reliability and simple maintenance, thus helping customers avoid costly repairs and system failures, which can negatively impact productivity, said Kenneth Schoeneck, global engineering director, Ingersoll-Rand Air Solutions. Coupled with Ingersoll-Rand s time-proven, reliable airend, Nirvana is as low-maintenance as air compressor can get.

Approximately one-third the size of conventional induction motors, the HPM motor is controlled by variable speed inverters which match compressor output to demand at all times and enable the Nirvana compressor to cycle on and off infinitely. By comparison, typical induction motors operate only at fixed speeds, which wastes a great deal of energy.

In addition, the HPM motor is significantly easier to repair than conventional motors. Instead of complex, continuously wound windings found within the stator of a traditional motor, the HPM motor stator features independent coil modules that can simply be removed and serviced on site by trained Ingersoll-Rand technicians.

This means that repairs can be done at a fraction of the cost to rewind a conventional motor and completed within four to six hours instead of days or weeks often required for other motors.