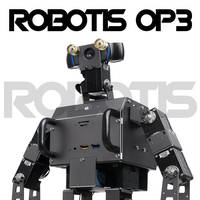 ROBOTIS OP3 Humanoid Robots use Dynamixel X-series servos and are integrated with quadrupled memory. Units are equipped with Logitech C920 camera which offers clear vision at 1920x1080 resolutions and up to 30fps. Products come with an Intel® NUC onboard computer which features 8GB of RAM, 128GB of disk storage and an Intel® Core™ i3 CPU. Robots are incorporated with OpenCR1.0 controller board and ARM® Cortex®-M7 processor.

The Next Move in ROBOTIS Open-Platform Humanoids

The ROBOTIS “OP” series of humanoid robots were originally designed for RoboCup’s fully-autonomous robot soccer league, resulting in an agile and capable platform for humanoid research and a favored launchpad for both academic and industrial R&D in autonomous biped robotics.

The third generation “OP3” follows the same formula that has made its predecessors so successful: an affordable, ROS-enabled, 20-degree of freedom miniature humanoid robot platform with advanced computational power, sophisticated sensors, high payload capacity, and dynamic motion provided by ROBOTIS Dynamixels. But where the OP3 really shines is how it manages to improve upon the technical capabilities of the previous “OP2” in just about every way.

Intel® NUC Onboard Computer – With 8GB of RAM, 128GB of disk storage and an Intel® Core™ i3 CPU, the OP3 has quadrupled memory and dramatically improved computational power versus the previous OP2 so that even more work can be accomplished without resorting to offboard processing.

User Friendly Sub-Controller – To interface with actuators and sensors, the OP3 adopts the ROBOTIS OpenCR1.0 controller board, an open-source embedded controller with an integrated IMU, an ARM® Cortex®-M7 processor and Arduino-like programming capability for rapid development of local control algorithms with plenty of computational headroom.

ROBOTIS is a leading developer of smart servos, industrial actuators, manipulators, open-source humanoid robot platforms and educational robot kits based on our DYNAMIXEL actuator technology. Our products are designed to be deployed in a wide variety of fields including Education, Hobby/DIY, Research & Development, Prototyping, and Industrial applications.