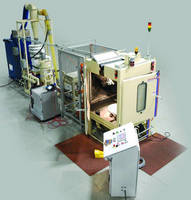 
Saratoga Springs, NY - Guyson Corporation has introduced a robotic gritblasting system that enables consistent production of a specified finish on a wide variety of complex-shaped components. The Model RB-9 is designed to offer precision and flexibility in critical surface preparation work.

A six-axis robot with a suitable payload and range of motion serves as a nozzle manipulator when mated with a rotary table blast cabinet having a 48 x 48 x 48-inch work envelope. Rotation of the turntable is powered by a servomotor and controlled as a seventh axis of robotic motion, allowing extremely accurate positioning and movement of the work piece during automated blasting routines. Thus, the RB-9 is capable of constantly maintaining a specific nozzle angle, offset (stand-off distance) and surface speed as it follows the intricate contours of components in execution of the programmed grit blasting process.

The RB-9 can be optionally equipped with a crane slot in the roof of the blast cabinet to facilitate loading and unloading of heavy workpieces by an overhead hoist. Access to the blast enclosure is provided by two full-width doors with abrasion-protected view windows. The entire blasting chamber and turntable are lined with quarter-inch-thick bonded rubber sheeting to resist the abrasive effects of harsh grit media.

Supplied with either suction-blast or pressure-blast media delivery, the Model RB-9 is commonly provided with an enhanced media reclamation system that includes a vibrating screen classifier to separate larger or smaller particles from the blasting grit of the exact mesh size specified for the surface preparation process. The robotic gritblast system can also feature media level sensors and an automatic dispensing hopper to replenish the supply of blasting grit before a low media level could compromise the precision finishing results.

Among the human-machine interface configurations offered by the finishing system designer and builder is a freestanding control console with a touch-screen panel. Blast process parameters associated with up to 100 different robotic blasting routines are stored by the system's programmable logic controller and recalled at a finger's touch.