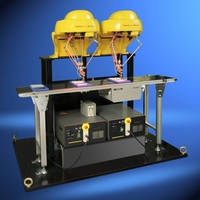 The M-1iA is a lightweight and compact six-axis, parallel-link robot designed for small part handling, high-speed picking and assembly applications. The unique parallel-link structure provides higher speeds and accuracy compared to traditional assembly robots. The robot can be installed in a variety of orientations, and has a three-axis wrist, making it extremely flexible.

The M-1iA also offers a four-axis model for simple assembly operations such as part picking for kitting. A single-axis wrist offers speeds up to 3000 degrees per second.

The M-1iA, like all FANUC robots, operates with the company's latest R-30iA controller with integrated intelligent functions such as iRVision®, Robot Link, and Collision Guard.

At the show, two M-1iA robots equipped with iRVision 2D will assemble and disassemble a 10-key keyboard at high speeds. "This robot is well-suited to precise assembly applications, even the most complex," added Jhaveri.

The M-1iA offers a wide range of benefits, including:

o Can be separated from its stand, allowing easy integration into a machine.

o A camera for iRVision (built-in) can be integrated into the robot.

o Robot Link controls and coordinates up to ten robots through a network exchange of robot positional data.