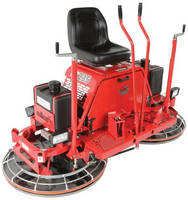 The Allen MP 235 Edger is a total re-design of the MP 225 Edging Mechanical Drive Riding Trowel. The MP 235 Edger is so unique that it's patented. This unique riding trowel has rotating guard rings which allows the operator to run along edges of walls, and around columns and pipes to achieve a hard troweled clean finish every time. This exclusive Allen Rider allows the operator to edge within 5/16" of the edge of a wall, eliminating the need to hand finish those areas. This patented trowel features similar specifications as our MP 215 Riding Trowel, along with a stretched frame for improved productivity and operator comfort. The higher horsepower gasoline engine and heavy-duty drive train is packaged in an easy-to-service frame. The Allen Standard-Duty Gearboxes and four-bladed 36" diameter rotors are proven performers in the field. The MP 235 Edger is now equipped with a Torque Converter Clutch which gives the operator full variable speed control of the rotors. The MP 235 Edger is one of the latest additions to Allen's Mechanical Pro (MP) Series of Riders launched in 2011. MP 235 Edger standard features include: