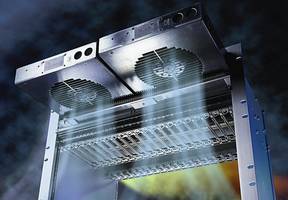 The Pixus reverse-impeller blowers require only 1U of space above the card cage to provide high-performance cooling. This approach helps keep the chassis height low, while providing more efficient and effective cooling than axial muffin fans that are often employed in the rear of an enclosure. Located directly above the card cage, the 12V RiCool V fans provide up to 200 Cubic Feet per Minute (CFM) of cooling and 3.2" of H2O static pressure.

The new fans from Pixus provide full shelf management functionality and are individually hot swappable. There is also a self-controlled (thermistor) version for non-intelligent applications. Pixus will utilize these blowers in front-to-rear cooled MicroTCA systems and in 3U/6U backplane systems (OpenVPX, CompactPCI Serial, VME64x) that require high airflow and reliability.