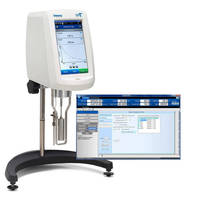 The RheocalcT Test Wizard reduces the time and effort needed to set up popular tests such as: time to stop, time to torque, speed ramp/shear rate ramp and temperature profiling.  RheocalcT Test Wizard can create a Thix Index Test (used to calculate the ratio of viscosity at low speed vs. viscosity at a higher speed) or a curing test to automatically reduce speed at preset torque values. In addition, you now can use the Wizard to created and run a Yield Stress Test for the DV3T Rheometer.

Many layout & navigation improvements have been implemented including the addition of a Favorites Bar. Import/Export functions have also been improved: simplifying excel data for export, importing existing test files from Rheocalc32 and EZ-Yield, and reducing PDF file export size.

RheocalcT can be used with Brookfield’s DV2T Viscometer and the DV3T Rheometer. It will run on Windows 8, 7, Vista or XP.  Processor speed should be 2 GHz or higher.  Minimum RAM requirement is 2GB.  Two USB ports are recommended to support viscosity testing with concurrent temperature control using a Brookfield accessory, such as the TC Circulating Temperature Bath or Thermosel System.