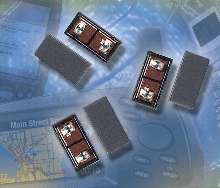 Silicon-based Series HPC0201A, with 0201 footprint, features single-side contact configuration, which eliminates tombstoning problem that occurs using conventional capacitors. Flat silicon surface facilitates pick-up in pick-and-place operations. Available in 44 capacitance options from 0.4-39 pF with tolerances as low as Â±1% or 0.05 pF, capacitors are rated for 6, 10, 16, and 25 V operation. Dimensions are 0.024 x 0.012 in. with 0.009 in. profile.

MALVERN, PENNSYLVANIA - April 28, 2004 - A new family of silicon-based RF capacitors in the 0201 footprint that will help designers reduce the size and improve the performance of wireless communications products was released today by Vishay Intertechnology, Inc. (NYSE: VSH).

Based on a proprietary Vishay semiconductor process, the new HPC0201A silicon capacitors enable higher-performance, higher-precision operation at high frequencies while delivering low parasitic inductance and tight tolerances. Device dimensions are just 0.024 in. [0.61 mm] by 0.012 in. [0.30 mm] with an extraordinarily thin 0.009-in [0.23 mm] height profile.

The single-side contact configuration of the HPC0201A eliminates the "tombstoning" problem that plagues board assembly when using conventional capacitors with wraparound terminations. The smooth, flat silicon surface of the HPC0201A simplifies the pick up step in pick-and-place operations, making board assembly faster and more efficient. Yet the HPC0201A capacitors fit on exactly the same pads designed for conventional wraparound terminations.

Available in 44 standard capacitance options ranging from 0.4 pF to 39 pF with tight tolerances as low as ±1 % or 0.05 pF, the capacitors announced today are rated for 6-V, 10-V, 16-V, and 25-V operation. Devices with non-standard capacitance values and with lead (Pb)-free solder are available on request.

Vishay, a Fortune 1,000 Company listed on the NYSE, is one of the world's largest manufacturers of discrete semiconductors (diodes, rectifiers, transistors, optoelectronics, and selected ICs) and passive electronic components (resistors, capacitors, inductors, and transducers). The Company's components can be found in products manufactured in a very broad range of industries worldwide. Vishay is headquartered in Malvern, Pennsylvania, and has plants in 17 countries employing over 25,000 people. Vishay can be found on the Internet at www.vishay.com.
Share