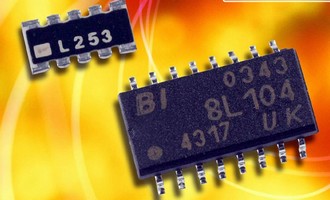 
Surface mount 2512 chip package is one of the industry's smallest ladder networks...

According to Jim Rieley, Sales Director for BI Technologies' SMT Division, the BCN31L and 628L Series ladder networks provide an economical and accurate means of data conversion for design engineers. "The output accuracy of an R2R ladder network, when it oerates as an array of voltage dividers, is a function of how closely each resistor is matched to the others in the network," Rieley explained. "Because our ladder networks consist of resistor arrays that are printed directly onto a single substrate using a single film, they share similar electrical characteristics, giving them an inherent accuracy advantage over discrete solutions."

The BCN31L Series, in 2512 chip configuration, is one of the smallest ladder networks on the market, Rieley continued. The 8-bit, 10 terminal, 2512 BCN31L Series ceramic devices feature a ladder accuracy of ±½ LSB (least significant bit). The networks have a power rating of 25mW/resistor, with a package power rating of 400mW.

Typical pricing for the BCN31L and 628L ladder networks starts at $0.18 and $0.39 respectively in quantities of 12K. Lead times are from stock to 8 weeks. Samples are available immediately for engineering evaluation and customer prototypes.