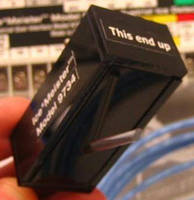 By controlling and minimizing frost accumulations on refrigerator evaporator coils and fins, Ice Meister(TM) Model 9734-REFR Adaptive De-Frost Controller helps conserve energy at household and commercial levels. It replaces refrigerator's defrost timer and will reduce, limit, and prevent all insulating frost. Tested by NASA, product works by sensing interaction between molecules of frost and photons of light and then operating defrost heaters only when frost is present on coils.

FROST is a major concern because frost is a thermal insulator that forms out of thin air and accumulates on refrigerator coils and fins. Frost interferes with proper heat transfer. Every time a refrigerator door is opened and closed, outside air enters in. The outside-air humidity can be higher than that of the refrigerated air inside, and dew can appear and freeze as frost on the refrigerator's internal components. Frost is normally removed from by a de-frosting heater, which gets hot and melts the frost away. But applying heat inside a refrigerator is counter-productive to keeping the food cold, so de-frost heaters should be energized as little as possible.

The problem is that de-frost cycles are normally under control of a primitive electro-mechanical timer. There may be little or no relationship between the de-frost heater operation and the frost which it is supposed to eliminate, causing a huge disparity between refrigerator de-frost cycles and the function they are intended to accomplish, worldwide.

In the interest of sustainability, energy conservation, social responsibility and reduced operating cost for household and commercial interests, insulating frost on refrigerator coils should be reduced as much as possible, limited, and prevented from even forming in the first place.

By replacing the refrigerator's primitive de-frost timer, new Ice*Meister adaptive de-frost heater control helps reduce, limit and prevent all insulating frost. NASA-tested Ice*Meister works by sensing the interaction between molecules of frost and photons of light. It conserves energy by operating de-frost heaters when and only when frost is present;, primitive timers can be hit-or-miss. The quantified amount of energy to be saved depends on a large number of local variables, including ambient humidity and temperature, season of the year, household demographics, local customs, etc.

In operation, Ice*Meister senses the very earliest appearance of frost on refrigerator coils (see figures B & C). As soon as frost appears, Ice*Meister turns the compressor OFF; turns the heater ON, and immediately begins to melt away the offending frost. Then, as soon as the offending frost has been melted away and removed, Ice*Meister turns the heater OFF and turns the compressor back ON again. The refrigerator returns to normal operation, its defrost controller sweeping back-and-forth across the frost-formation threshold, and actively keeping the condenser coils frost-free.

Ice*Meister can be installed on any refrigerator at the factory, or retrofitted in the field as an aftermarket product. It eliminates all moving parts, reduces parts count, reduces cost to manufacture, improves reliability, and saves Megawatts of electricity, worldwide. Ice*Meister controls any refrigerator's de-frosting system to sweep back and forth across the ice formation threshold in real time.