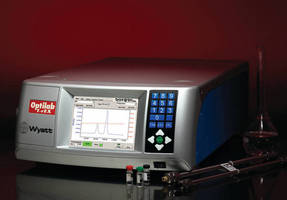 OptilabÂ® T-rEX(TM) measures both large and small signals within same data run and, featuring high-speed DAQ and onboard computer, allows rapid scanning of arrays, with 1 million measurements made every second. Instument includes flow cell with total volume of 7.4 ÂµL, minimizing band broadening and providing temperature stability. Product can be used in any isocratic chromatographic conditions and for many gradient applications.


SANTA BARBARA, CALIFORNIA - Wyatt Technology Corporation, the world leader in absolute macromolecular characterization instrumentation and software, announces the launch of its brand new Refractive Index (RI) detection instrument - the Optilab® T-rEX(TM). While RI detectors offer extreme sensitivity over a limited range and reduced sensitivity over a greater range, the Optilab T-rEX provides full range of detection and sensitivity across the entire dynamic range, meaning there is no longer a need to compromise one for the other. The new instrument has evolved from Wyatt Technology's award-winning Optilab® rEX(TM), which revolutionized RI detection in 2004, offering an alternative to the standard two photodetector deflection-based design.

The new instrument has 256 times the detection power and up to 50 times the dynamic range of any RI detector currently on the market and has the unique ability to measure both large and small signals within the same data run. The range of the Optilab T-rEX enables the instrument to be used in almost any standard isocratic chromatographic conditions and for many gradient applications.

In addition, recent developments in heterojunction light emitting diodes (LEDs) allow the T-rEX to have a light source 50 times brighter than previous instrumentation. This superior light source results in the detector array filling with light much faster than previously possible. The new instrument also offers high speed data acquisition and includes an onboard computer, allowing the rapid scanning of arrays, with 1 million measurements made every second. The T-rEX also has a flow cell with a total volume of only 7.4 µL, which is 25% less than the leading refractometers available today. This results in minimized band broadening and better temperature stability.

Geof Wyatt, president of Wyatt Technology, comments: "The new Optilab T-rEX builds on the Optilab rEX, which became a first in liquid chromatography detection by combining cutting edge technology with measurement and processing techniques from the field of particle physics. Since the launch of the rEX, technology continues to evolve, enabling us to develop an instrument that now offers full sensitivity and range of detection across the entire dynamic range. This has been achieved while still incorporating the developments in nanoscale semiconductor fabrication techniques, NMOS linear photodiode array technology, high speed data acquisition and raw computational power that made the rEX a success."

Based in Santa Barbara, California, Wyatt Technology is the world's leading provider of instruments for absolute macromolecular characterization. With over 35 years' experience developing multi-angle light scattering detectors, working with customers in the biotechnology, chemical, petrochemical, pharmaceutical, academic and government arenas, Wyatt prides itself on its entrepreneurial spirit, and the uniqueness of its offerings. The Company's groundbreaking technology and uncompromising levels of customer care make Wyatt the global hallmark in its field. For more information, please visit www.wyatt.com
Share