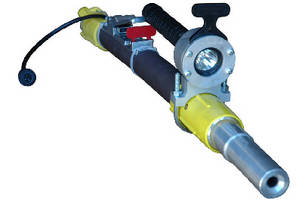 
Magnalight.com from Larson Electronics has announced the release of a powerful and durable LED blasting light designed to withstand the abusive conditions of media blasting operations while providing the convenience of rechargeable operation. Designed to be mounted to standard industrial grade media blasting guns, the BLG-LED-4REX explosion proof LED blasting gun light produces the intense illumination needed to cut through the dusty conditions produced by blasting operations. Equipped with a quick change lens protection system this LED blasting light is ideal for the abusive and fast paced conditions of the industrial work place.

The BLG-LED-4REX rechargeable explosion proof LED blasting gun light from Magnalight.com produces a powerful light beam capable of cutting through the dusty and debris filled conditions produced by blasting operations. Built for easy mounting to standard media blasting guns, this rechargeable LED blasting light allows operators to put powerful illumination precisely on the areas being worked with during blasting operations. Protection for the LED light assembly from blasting particulates is provided by a quick change protective lens assembly that prevents the blasting media from clouding or damaging the actual lamp lens. This protective lens cover system includes a high strength lens holder fitted with a tempered glass lens that slips into place in front of the LED light assembly and is secured into position by a spring loaded lock. This lens cover absorbs the damage from blasting media and once no longer effective, can be quickly and easily replaced with a replacement by simply sliding the old lens out of its slot and sliding a new one in. Replacing the lens requires no tools and can be done even while wearing full protective gear and gloves without any degree of difficulty. This innovative quick change lens system is perfect for operators working in hazardous locations and media blasting operations where protective full body gear is required. This system in effect allows operators to perform lens replacements without the need to remove any protective gear or leave the work space.

Further adding to the convenience of this LED blasting light is rechargeable battery powered operation which provides 4 or more hours of run time on a single charge. This rechargeable battery powered operation does away with the problems of tangling cords and bulky transformers, and reduces costs since replacement batteries do not have to be purchased. This light is highly efficient and powerful, and can be operated in different modes for full or partial power and longer runtimes with a push of the rubber coated on/off button. Pressing the switch once activates the light in high mode, producing the maximum power light beam producing 130 lumens. Holding the switch down activates the light in low mode, producing 50 lumens of useable light that will last for 12 hours. This blasting light is ruggedly built to withstand abusive conditions and with LED operation has no filament to break or bulbs to burn out. The BLG-LED-4REX blasting gun light is ideal for operators in hazardous locations who need powerful and easy to operate illumination that can withstand demanding conditions and abusive use without the inconvenience of power cords and expensive batteries.