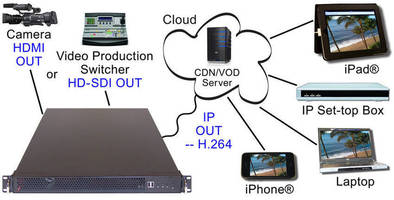 San Diego, California — DVEO, a strong supplier to Telcos, cable TV, IPTV and OTT operators around the world, is now shipping the newest addition to their product family of real time streaming appliances.  DVEO will feature the high availability MultiStreamer™ II DIG/IP: TELCO at the International Broadcasting Convention (IBC), September 11-15, in Amsterdam, at stand 2.A34.

"The MultiStreamer II DIG/IP: TELCO is the new high reliability version of our flagship cost effective origin encoder.  It has now been repackaged for mission critical Telco applications," commented Laszlo Zoltan, Vice President of DVEO.  "Over the last four years we have shipped over 2,000 units of the original MultiStreamer.  Customers can now choose the original MultiStreamer or the high availability unit demanded by Telco customers."

The Linux® based system features built-in streaming support for 500+ simultaneous HLS, DASH, and/or RTMP users.  It supports logo insertion and text overlay on outputs, and includes on board stream archiving for up to 400 GB.  It can upconvert incoming SD streams to HD, and scale down.  Other features include schedulable input, Variable Bit Rate (VBR) encoding, and support for Octoshape™ (now part of Akamai) and Verizon® upLynk.

Other options include a single HDMI input instead of SDI/HD-SDI inputs, additional storage capacity of up to 1 TB, and 4:2:2 with 10 bit color space support.

• Next generation version of our popular MultiStreamer™ encoder, with up to four 1080p streams out

• Able to upconvert incoming SD streams to HD, and scale down

All other trademarks and registered trademarks are the properties of their respective owners.

For more information on DVEO, please contact Rebecca Gray at +1 (858) 613-1818 or rebecca@dveo.com.  To download DVEO's press releases and product images, visit the news section at www.dveo.com.