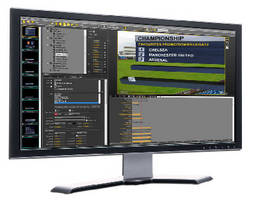 
Billerica, Massachusetts – Broadcast Pix™ today introduced fX3D, a real-time 3D graphics system designed to build dynamic graphic content for live events, sports, broadcast news, or channel branding. Designed as a standalone graphics system for existing broadcast infrastructures or as an addition to Broadcast Pix Granite™ or Mica™ integrated production switchers, fX3D makes it easy to create and playout high-end graphics. fX3D will be available at the 2014 NAB Show (Booth SL6325), which runs April 7-10 in Las Vegas, Nev., and is one of several new products that will be demonstrated by Broadcast Pix.

The fX3D system includes three software modules that create a simplified end-to-end graphics workflow. fX3D Creator software provides an intuitive interface to design and create graphic content, complete with a built-in 3D modeler. Lights, shaders, movement, and materials on 3D objects can be controlled in real time and in resolution independent HD. fX3D API allows the system to be controlled through Broadcast Pix switchers, and also allows integration with third-party products, such as broadcast news systems.

fX3D Playout is a template-based rundown controller that brings completed graphics to air. Assets can be searched using a variety of parameters, including keywords and date. fX3D Playout also allows manual or automatic graphic content updates via external resources, including RSS feeds or XML files, and supports multi-resolution output.

“Many of our customers have expressed interest in a powerful but affordable high-end graphics system, and our answer is fX3D. From designing and creating graphics to updating information within those graphics and then taking those graphics to air, fX3D does it all,” explained Steve Ellis, general manager, Broadcast Pix. “It is a complete graphics solution, so you never need to leave the application to get results that rival what you see on national networks.”

The hardware behind fX3D is the real-time fX3D Engine, which provides the power to create and repurpose 3D graphics simultaneously. Housed in a 3 RU chassis, the Windows-based, single-channel system will also be available in a dual-channel configuration. Plus, a high efficiency broadcast model with dual power supplies and support for higher pixel counts will be available in May.

fX3D system pricing starts at $15,995, though modules can be purchased separately.