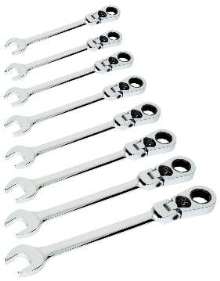 KENOSHA, Wis., August 9, 2004 - More than any other ratcheting wrench, the new Blue-Point® Flex-Head Ratcheting Wrench from Snap-on Tools Company demonstrates that sometimes it's the smallest changes that make the biggest difference when helping technicians work faster and more efficiently. The new Blue-Point Flex-Head Ratcheting Wrench Sets (BOERF708/BOERMF712) are the first to feature small tabs on the inner box end that allow the tool to accept both six- and 12-point fasteners, and hold six-point fasteners in place.

The unit contains two overlapping hex configurations, which can be engaged and changed to accept either six-point or 12-point fasteners, depending on the task at hand. Blue-Point Flex-Head Ratcheting Wrenches provide multiple tool options for technicians to reduce the time it takes to complete jobs that require tightening, loosening and releasing fasteners.

Each Flex-Head Ratcheting Wrench contains tabs that allow the box end of the wrench to serve as a "keeper" by grabbing six-point fasteners and holding them in place inside the wrench head. Using the keeper function, tool users can easily and carefully position fasteners to begin the tightening process, which is especially useful in hard-to-reach areas. The grabbing design reduces the chance of losing hold of fasteners during use. Traditional closed-end ratcheting wrenches do not offer the exclusive grabbing feature.

Rotating the wrench head by one point allows users to pass over multiple fasteners on a common stud, which can sometimes be in the way. The rotated wrench head allows the obstructing fastener to pass through the wrench head and provides access to six-point fasteners positioned farther down the stud. Technicians can use the tool as a speeder ratchet to "speed" fasteners tightly in place. A firm detent locks the multi-position wrench head, so technicians are always in control.

The large, ergonomic reverse lever provides non-slip changes of direction. The reversible option allows technicians to switch on the fly from forward to reverse, without having to remove or completely readjust the tool.

Blue-Point Flex-Head Ratcheting Wrenches also feature a flexible box end that pivots on a hinge so the box end can swing and provide a range of angles for different working situations. The feature allows technicians to make the tool shorter to provide maximum clearance for work in tight areas. Using the flexible box end feature in combination with tool's keeper function provides even more versatility for jobs that offer limited access and restricted mobility.

Opposite the box end, the open end of the wrench features the exclusive Snap-on® classic design that technicians have relied on for decades to break tough fasteners loose. The new Blue-Point Flex-Head Ratcheting Wrenches are now available in an eight-piece fractional Flank Drive® set (5/16 inches to 3/4 inches) and a 12-piece metric Flank Drive set (8 millimeters to 19 millimeters).

Snap-on Tools Company is a subsidiary of Snap-on Incorporated, a leading global developer, manufacturer and marketer of tool and equipment solutions for professional tool users. Product lines include hand and power tools, diagnostics and shop equipment, tool storage products, diagnostics software and other solutions for the transportation service, industrial, government, education, agricultural, and other commercial applications, including construction and electrical.

Products are sold through its franchisee dealer van, distributor channels and company direct sales, including snapon.com.