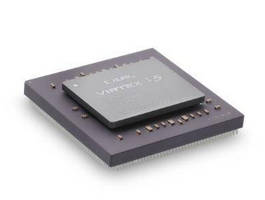 The newest FPGA from Xilinx is one of the many ways Xilinx is addressing the Programmable Imperative that system developers face given the high-cost, and risk, of custom chip development and rigorous demands for higher-performance and integration. The Virtex-5QV device joins the FPGAs, IP, ISE® Design Suite development tools, kits and support that make up Xilinx's Targeted Design Platforms for delivering programmable solutions that help developers avoid the high cost of ASIC development and still meet the performance and integration requirements specific to their markets. As the world's largest rad-hard reconfigurable programmable logic device, the Virtex-5QV FPGA is well suited to help next-generation space systems push the boundaries for performance and capability in applications such as video display, communications, radar, encryption, packet processing and control.

"The radiation hardened Xilinx Virtex-5 FPGA represents the biggest step ever taken in performance and affordability for space electronics. Our Air Force satellite developers will be able to do more on-board processing using less power than ever before. And, the flexibility of the Virtex-5QV FPGA means that satellite development schedules will be shortened, saving even more money," said Dr. David A. Hardy, associate director, Space Technology, Air Force Research Laboratory's Space Vehicles Directorate, Kirtland Air Force Base, N.M.

The radiation-hardened version of the commercial Xilinx Virtex-5 FPGA was developed under sponsorship by AFRL's Space Vehicles Directorate.

According to Dave Jungkind, director, Business Development at SEAKR Engineering, Inc., "SEAKR has several programs that are base-lining Xilinx devices, but what the new Virtex rad-hard FPGAs will bring is a step function improvement in size, weight, power and performance. SEAKR is investing heavily to bring this game-changing capability to the aerospace market."

High Performance FPGAs for the Demanding Requirements of Space

The rad-hard features inherent in Virtex-5QV devices are backed by the highest levels of in-beam testing by the Xilinx Radiation Test Consortium (XRTC) and equivalent to millions of device years in space radiation environments. This means Virtex-5QV FPGAs provide exceptional protection against Single-Event-Upset (SEU), Total Immunity to Single-Event Latchup (SEL), high tolerance to Total Ionizing Dose (TID), as well as data path protection from Single-Event Transients (SET). For example, the Virtex-5QV FPGA configuration memory provides nearly 1,000 times the SEU hardness of the standard cell latches in the commercial device, while configuration control logic and the JTAG controller have been hardened with embedded triple module redundancy.

The Virtex-5QV device will be sampling in the current quarter with general production availability planned for first half calendar year 2011.

XILINX, the Xilinx Logo, Virtex, Spartan, ISE and other designated brands included herein are trademarks of Xilinx in the United States and other countries. All other trademarks are the property of their respective owners.