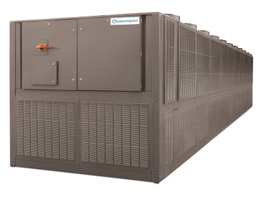 Quantech™ has expanded its line of QTC4 Air-Cooled Variable-Speed-Drive Screw Chillers to a total of 21 models ranging from 150 to 360 tons. With the expanded line, Quantech now covers 90% the air-cooled chiller market with many models in-stock ready to ship within three to five days to enable immediate chiller replacement. The Quantech Quick Ship program significantly shortens lead times, especially for 275-ton and larger screw chillers where eight- to nine-week lead times are common.

For more information or to contact a Quantech manufacturer representative, visit http://go.quantech-hvac.com/QTC4Exp.