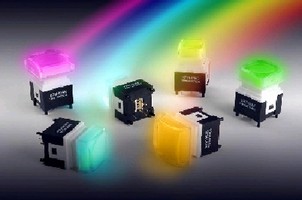 Suited for A/V and broadcast markets, Series KP01 enables designers to create customized control panels with project-specific colors. Offered in 12, 15, and 17.4 mm sizes with height of 23 mm off PC board, they feature sculptured square caps that facilitate installation of film inserts. Single-pole, single throw switches are rated 100 mA max at 12 Vdc and offer option of tactile and non-tactile actuation. They are also available with red/green, built-in bi-color LED.

RGB LED technology brings even more flexibility to design engineers. With high quality LEDs for superior color matching, the KP01 with RGB enables designers to create customized control panels with project specific colors. The success of RGB illumination in NKK's KP01 series is in the quality of red, green and blue LEDs used in the packaging. The RGB LED option also allows for low power use and low heat solution.

This series, which was originally designed to offer engineers choices that were unavailable or limited in their functionality, has many distinctive features that make it the ideal choice for large a/v and broadcast markets. Three different cap sizes are available in the KP01 series: 12mm, 15mm and 17.4mm. NKK is the first manufacturer to offer all three different cap sizes with the same height dimension off the PC board.

In addition, the height of the KP01 series is equal to the height of NKK's programmable LCD switch, the IS SmartSwitch series, which has become an industry standard. The compact design is 23mm from the PC board to the top of the cap and features a long travel of 4.5mm. The sculptured square caps of the KP01 allow easy installation of film inserts and provide versatility and design flexibility in all applications. Engineers can request legend packets, which help facilitate the ordering of customer specific legends.

With this series NKK offers an option between tactile and non-tactile actuation. The KP01 series was designed to give positive indication of circuit transfer as well as smooth operation. Engineers will find a smooth, non-gritty, high quality switch operation with the KP01 series.

Not only is the KP01 series available with RGB technology, but designers can also choose switches constructed with a red/green, built-in, bicolor LED, which provides bright illumination. An amber color can be produced easily by simultaneous illumination of the red and green LEDs. The built-in LED frees engineers from having to source LEDs on their own and install them, or from having to assemble an LED into the base switch at all. NKK further enhanced the ease of installation of the KP01 series by adding a specially designed, snap-in stand off for secure PC board mounting and alignment. PCB layout is standard .100 X .100. Terminals are epoxy sealed to lock out flux, dust and other contaminants.

NKK Switches is keenly aware of the myriad of issues that are covered under the RoHS directive. With more than 50 years of experience in the switch industry and as an environmentally-conscious company, NKK is committed to not only providing high quality products and services, but also providing environmentally safe products for its valued customers. NKK continues to lead the industry in responding to the needs of the marketplace with innovation, high reliability and a commitment to excellence.