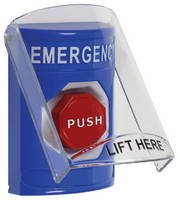 Molded from polycarbonate material, supervised cover with sound (STI-6517S) or with sound and wireless transmitter (STI-6517SW) mounts directly into STI StopperÂ® Station series pushbuttons. When STI-6517S is lifted to gain access to button, selectable 65 or 85 dB alert sounds. When STI-6517SW is lifted, selectable alert sounds and wireless signal is sent to receiver, which subsequently beeps and flashes to indicate that site has been triggered.

Button Shield with Sound or Sound and Wireless Transmitter


This inexpensive supervised cover with sound (or with sound and wireless transmitter) was created to mount directly into the STI Stopper® Station series of buttons. When cover is lifted an alert sounds and a signal is sent to the receiver. Includes a 2-channel transmitter; one monitors cover activity and one monitors button activation.

When the cover with sound (STI-6517S) is lifted to gain access to the button, a selectable 65 or 85 dB alert sounds. When the cover with sound and supervised wireless (STI-6517SW) is lifted, the selectable alert sounds and a wireless signal is sent to the receiver (requires receiver STI-34104 or STI-34108). The receiver will beep and flash, informing a site has been triggered.

Stopper Station Shield has two tabs that snap into the newer Stopper Station buttons, allowing it to easily mount over the push button. The shield also has a raised molded "LIFT HERE" inscription near the bottom.

Molded from thick, super tough polycarbonate material, it takes hard knocks in stride while protecting the button against accidental activation. Polycarbonate is backed by a lifetime guarantee against breakage in normal use (one year on electro mechanical and electronic components). UL/cUL Listed. 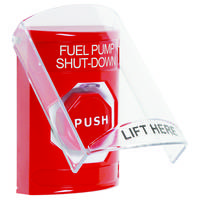 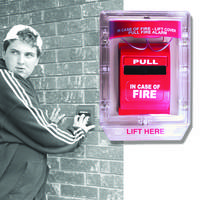 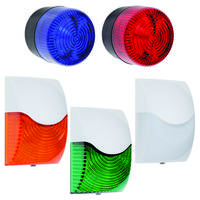 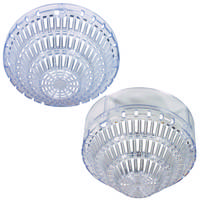 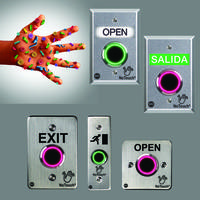