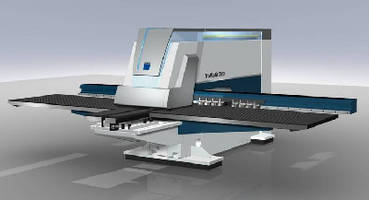 Combining punching, laser cutting, and laser welding in one system, TruMatic 3000 Fiber shares fiber-guided TruDisk laser with TruLaser Robot 5020 cell in TRUMPF LaserNetwork. TruDisk 3001 provides 3 kW of laser power and can switch from one application to another in milliseconds. When combination machine is performing punching operations and laser is not required, its energy is available to robot cell, and when cell is being prepared or adjusted, it relinquishes laser to TruMatic 3000.

Triple Combination - With the TruMatic 3000 Fiber Punching, Laser Cutting and Laser Welding can be Combined in a Single System


Stuttgart, Germany, - One laser for two different machines: that is the key concept behind the new TruMatic 3000 Fiber punch/laser combination machine. It shares a fiber-guided TruDisk laser with the TruLaser Robot 5020 cell in the TRUMPF LaserNetwork, an arrangement that significantly increases the utilization rate of the beam source.

Generally, the laser is only active for a brief period of the part processing time in a mid-range combination machine such as the TruMatic 3000, which was previously only available with a CO2 laser. The rest of the time it is idle, while the machine is either punching or being prepared for a job. Similar beam-on times apply for laser welding systems, where adjustments regularly have to be made to aspects such as jigs and fixtures. There is a great deal of potential to increase efficiency in this area.

Combination machines have long established themselves as versatile and flexible tools for sheet metal fabrication, and demand for these types of machines has recently been particularly high. In contrast, many job shops remain skeptical about the possibility of gainfully integrating laser welding in the process chain. This is where the new TruMatic 3000 Fiber opens up a whole new world of exciting potential.

The most efficient method is undoubtedly to have the TruMatic 3000 Fiber and TruLaser Robot 5020 systems working in parallel. The fiber-guided TruDisk 3001 with its 3 kilowatts of laser power can switch from one application to the other in a matter of milliseconds. The machines are supported by the intelligent LaserNetwork and are able to automatically make use of the laser beam as required. This means that whenever the combination machine is performing punching operations and the laser is not required, its energy is available to the robot cell; equally, when the cell is being prepared or adjusted, it relinquishes the laser to the TruMatic 3000. Allocation of the energy-efficient solid-state laser can also occur in other formats. An example would be using it for the combination machine in one layer and for laser welding in the next. The laser beam is fiber-guided, which means that it can be flexibly deployed, while the fact that it has been specifically designed for thin sheet metal up to 4 millimeters thick means that it is perfectly suited to combination processing and can help to reduce cutting costs per meter.

In addition to sharing use of the laser, the two systems further complement each other. The combination machine offers a broad range of punch applications and forming variants and can be used for jobs such as preparing joint edges for welding. That simplifies jig and fixture engineering and makes even smaller batches viable, which means there are now even more good reasons to start enjoying the advantages of laser welding.