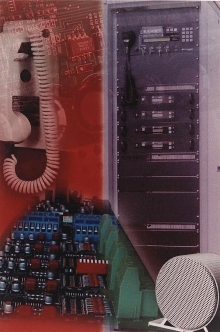 Microprocessor-based NOVA 2001 provides routine announcements, emergency announcements, PABX or telephone announcements, and alarm tone/speech activation. PA System can be integrated to PC so operator can monitor and manage operations from on-site or remote location. System information, such as equipment failure or alarm, can be recorded and downloaded to printer or file. Using SMART Modules(R), system performs self-diagnostics and automatic level setting of broadcasts.

Major advances to a microprocessor-based system for public address and emergency notification for transit operations have been introduced by GAI-Tronics Corporation, a division of Hubbell Industries. The NOVA 2001 system is designed to meet the routine and emergency communications and safety needs of the world's industrial markets. Based on the highly successful NOVA system developed in 1988, the NOVA 2001 with S.M.A.R.T. Modules is designed and built to withstand adverse environmental conditions such as temperature extremes, high noise, pollution and/or corrosive agents typically found in industrial applications. Multiple Uses The NOVA 2001 system allows routine announcements, emergency announcements, PABX or telephone announcements, and alarm tone/speech activation. Routine speech announcements can be directed to any or all sections of the system. Emergency announcements may be accompanied by strobe light illumination in noisy areas to attract the attention of all personnel. Announcements may be made from system control panels or from standard telephones through a dial-in feature, or may be generated automatically from a recorded source such as GAI-Tronics' Audio Messenger Interface. Up to 2 hours of speech, tones, and alarms may be recorded; and up to 48 messages and/or tones may be generated simultaneously to different areas. SMART Modules Using the SMART Modules(R)(patent pending), the system performs self-diagnostics and automatic level setting of broadcasts.
- Automatic Level Control of pages and alarms ensures messages are heard even if ambient noise levels vary widely.
- Addressable speakers allow pages to be directed to specific groups of speakers, even subsets of preset zones.
- The system will troubleshoot individual speakers, line transformers, and voice coils with no additional cabling required.
- S.M.A.R.T. Modules perform self-diagnostics to detect faults immediately so maintenance personnel save time troubleshooting.
- Configuration and fault diagnosis are available via LAN networks. Offsite personnel can evaluate data at remote locations.
Safety standards are increasingly stringent and frequently require that facilities be able to confirm that speakers are functional. This feature is especially important during an emergency so that lives are not unnecessarily lost. Fully Modular Design
The NOVA 2001 System features standard components that can be reconfigured easily to meet the changing needs of a particular installation. Fully compatible with third party equipment and systems, and designed for easy maintenance, these components include:
- Control cabinets which serve as central points for audio control and are capable of prioritizing and routing live voice or digitized messages;
- Speakers;
- Strobe lights; and
- Access Panels used to call the control points to report emergency conditions.
The system can be integrated to a PC control monitor to allow a system operator to monitor and manage real-time system operations from an on-site or remote location. System information, such as page detection, equipment failure, and alarm activation can be recorded and downloaded to a printer or file for future analysis and use. "Communication systems are a critical part of every industry. Besides improving efficiency, an intelligent PA system can significantly increase safety, a major and growing concern among all industries. And, with features including remote system monitoring and automatic speaker level adjustment, our system offers significant savings in maintenance costs WHILE increasing safety," said Jim Jurczyk, Vice President and Business Unit Manager for GAI-Tronics. About GAI-Tronics GAI-Tronics Corporation, a wholly-owned subsidiary of Hubbell Incorporated, is the world's largest company focused on the communication needs of the world's industrial markets. Founded in 1946, GAI-Tronics' three corporate divisions, Americas, UK/European, and Asian, offer service and sales support to thousands of customers worldwide. Major business lines include industrial communications; telephones and telephone systems and land mobile radio. GAI-Tronics' three manufacturing facilities, in Reading, Pennsylvania, USA; Burton-on-Trent, UK; and Milan, Italy, utilize quality standards including IS09001 and Six Sigma.