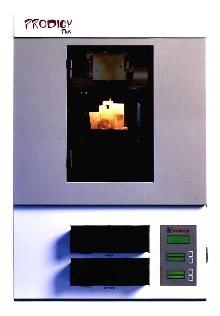 Moving Parts Can Be Built Pre-Assembled By Automated Prototyping System

With WaterWorks, users can make models with moving parts that are built pre-assembled. It allows the creation of intricate parts that are impossible to build otherwise. The system is based on the platform of the company's successful Prodigy system, introduced in 2000.

Besides the soluble support removal system, Prodigy Plus is outfitted with Insight preprocessing software developed for Stratasys' higher-end systems. The proprietary software offers users a high degree of control over workflow and model building. For efficiency, the software lets users build multiple parts simultaneously. At the user's workstation, Insight reports system status, job-build status, and a build log, which includes material used, material required, and material remaining. When a model is complete, Insight notifies the user by e-mail or pager.

"For too long, the features of higher-end RP systems have been out-of-reach for many organizations," says product manager Mary Stanley. "It's part of our mission here at Stratasys to lower the cost of modeling and prototyping to make it cost-effective for a broader market. Offering hands-free support removal in a lower price system is proof we're on track."

Prodigy Plus is quiet, safe, and compact. Like all Stratasys equipment, it requires no special facilities or venting and involves no hazardous materials or byproducts. It has a build
envelope of 8 x 8 x 12 in. (203 x 203 x 305 mm) and measures 27 x 34 x 41 in. (686 x 864 x 1041 mm). The system has three options for surface-finish resolution: Fine, Standard, or Draft.
Its software operates on the Windows NT or 2000 platforms. Stratasys systems typically represent the lowest total cost of ownership among the major rapid prototyping suppliers.

Windows NT and 2000 are registered trademarks of Microsoft Corp.
Prodigy, Prodigy Plus, WaterWorks, and Insight are trademarks of Stratasys, Inc.
Share