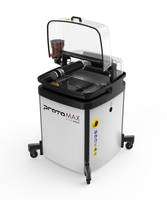 Suitable for prototyping and low volume cutting material under 2 in. thickness such as glass, granites, metals, wood and plastic in small job shops, engineering classrooms and makerspaces, ProtoMAX® Waterjet Cutter delivers a cutting speed of 30,000 psi. Unit’s pump and cutting table are placed on casters for easy movement. Product is plugged into 240 V AC dryer-style outlet.

OMAX Corporation announced the release of the new ProtoMAX abrasive waterjet, a compact, self-installed cutting system ideally suited for prototyping and relatively low volume cutting of almost any material under 2” thick. The ProtoMAX brings all the versatility benefits of large abrasive waterjet cutters in a sleek and economic package that’s perfect for small job shops, engineering classrooms, makerspaces, and personal use. It’s also a handy addition for large shops and fabricators that need occasional waterjet capabilities to complement their other cutting systems.

Though compact, the ProtoMAX delivers 30,000 psi cutting power with a 5 hp pump and can precision cut material under 2” thick of almost any type, from metal to composites, glass to granite, plastic to wood, and more. The ProtoMAX cuts with no heat-affected zone and no change to the material properties. The waterjet plugs into a 240V AC dryer-style outlet and does not require any hardwiring. The pump and cutting table are on casters for easy relocation. Work material is submerged under water for clean, quiet cutting that won’t disrupt a shared work space.

OMAX manufactures the ProtoMAX at the OMAX facility in Kent, Washington, including the pump, cutting head, abrasive feeder, motion controller and software. All parts are designed to work together as a complete, integrated system.

The programming of part files and the cutting operation are controlled by Intelli-MAX software. Vice president of marketing at OMAX Corporation Stephen Bruner comments, “It’s easy to program even complex paths on the ProtoMAX. We’ve taken many of the same popular CAD/CAM software features that we use in our industrial waterjet systems and incorporated it into the compact ProtoMAX waterjet. Behind the scenes, the software uses sophisticated waterjet cutting models that predict the jet’s precise behavior when cutting different materials, thicknesses and shapes. But the user interface is simple and straightforward, making it an ideal learning tool for computer-aided manufacturing.”

Based in Kent, Washington, OMAX Corporation is the leading manufacturer of advanced abrasive waterjet systems. Owner of the OMAX, MAXIEM, GlobalMAX and ProtoMAX brands, the company designs and manufactures complete waterjet systems that feature intuitive software, efficient pump technology, and a wide range of accessories. The ISO 9001:2015 certified company designs, manufactures, assembles and tests components as a complete system to ensure optimum performance. The company also has the most comprehensive service and support network in the waterjet industry to keep its customers ahead of the manufacturing curve. For more information, visit OMAX.com