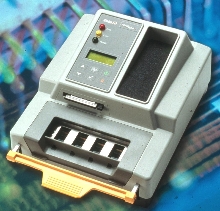 A four-site manual system, FlashPAK was designed specifically for Flash applications and has a unique architecture that delivers the lowest programming cost for high density Flash devices. This is accomplished by a combination of exceptional programming speed, system scalability, and software-based process control.

Costs are driven even lower by using the efficiencies of network control for firmware distribution and revision. For example, Programming Center managers will be able to streamline first article qualification and other processes, lowering their variable costs. OEM managers will gain control of their intellectual property as it moves from design to production, and prevent disruptions associated with outdated firmware. In addition, software design engineers will value FlashPAK for its ability to quickly program large Flash files.

The new system brings the benefits of network control and advanced programming architecture to manual Flash programming environments, assuring that programming is current, secure, traceable and failsafe. For example, integrated with Data I/O's high-volume programmers, FlashPAK becomes part of an end-to-end, networked programming solution that ensures the same, current programming algorithm is used at each step of product development and production.

In addition, the FlashPAK system uses the same programming language and engine as Data I/O's ProLINE-RoadRunner(R) automated inline programming system, so users can benefit from a consistent architecture from design through manufacturing. This lowers development costs and speeds time to market because the user does not have to reprogram the equipment to set up each stage of the manufacturing process.

"FlashPAK answers the real business needs of our customers because it offers them the highest programming flexibility and the lowest possible programming cost," said Fred Hume, Data I/O CEO and president. " Because FlashPAK is expandable, inexpensive,
and specialized for fast Flash programming, it will enable customers to operate leaner at lower programming quantities and more efficiently at higher quantities."

FlashPAK can be cost-effectively expanded as business needs grow. The user can start with one FlashPAK unit and add more units to increase the number of programming sites. The sites connect via the provided Ethernet cable to make an 8-, 12-, or 16-site system.

"The goal is to seamlessly integrate device programming into engineering, manufacturing, and business processes," said Kelly Hirsh, Business Unit Manager for Programming Technology at Data I/0. "Once companies apply lean manufacturing principals to device programming, they will benefit from improved reduced costs and increased flexibility."