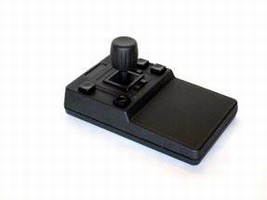 T-JOY3 controls 3 independent axes of motion when daisy-chained with motorized devices. As stand-alone controller, joystick is suited for motorized x-y or x-y-z stage applications. Interface includes 5 buttons pre-programmed with functions including: home all axes, save current position, and move to saved position. Buttons can also be programmed to trigger action by computer, such as execution of complex instruction sequence. Entire daisy-chain can be controlled through USB or RS232 port.

As a stand-alone controller, the T-JOY3 joystick is ideal for motorized x-y or x-y-z stage applications. The intuitive interface includes five buttons pre-programmed with useful functions such as "home all axes", "save current position", and "move to saved position". Buttons can easily be reprogrammed to any of a variety of useful functions.

For more sophisticated applications, a desktop or laptop PC may be used in conjunction with the joystick. Joystick buttons may be programmed to trigger an action by the computer, such as the execution of a more complex instruction sequence to connected motion control devices. The entire daisy-chain (3 Zaber motion control products plus the joystick) can be controlled through a single USB or RS232 port.

The intuitive interface of the T-JOY3 joystick, combined with the flexibility of connecting any of Zaber's motorized linear actuators, linear slides, x-y-z stages, rotation stages, or stepper motor controllers, makes motion control and automation easier than ever.

Detailed information about the T-JOY3 programmable joystick can be found here:
http://www.zaber.com/products/product_group.php?group=T-JOY

About Zaber:
Zaber Technologies Inc. was founded in 1997 when precision motion control was typically accomplished with DC motors and encoders, requiring complicated, cumbersome and expensive controllers, amplifiers and power supplies. In 2000 Zaber introduced the first daisy-chainable miniature linear actuator based on stepper motor technology with integrated RS232 communications and control electronics in one small package. Since then Zaber has added over 120 products to its family of precision motion control and laboratory automation devices including linear actuators, linear slides, motorized x-y-z stages, rotation stages, motorized mirror mounts, and micro-stepping motor controllers. More information on Zaber is available at www.zaber.com/home/about.php.