Empire's new line of Pre-Engineered Booths (PEB) feature all the essentials contained in blast rooms at a fraction of the cost. These 10'-high booths not only provide the blast punch to strip large parts fast. They also reclaim media, remove dust and breathe fresh air into the work enclosure with Empire's exclusive Booth Ventilation System (BVS). Moreover, they come in 10' x 10', 12' x 17', 12' x 24' and 12' x 31' models, all of which go up easily on a standard plant floor without welding or excavation.

For many applications requiring strict environmental and safety compliance, these Pre-Engineered booths offer an attractive alternative to do-it-your-self enclosures or higher priced blast rooms. Further, all the components-ranging from the central blast and recovery system to the 14 gauge wall and ceiling panels-come from Empire, thus assuring compatibility between various components as well as single-source responsibility for the overall performance of the system. These booths feature Empire's pneumatic blast and recovery system (PRS), which continues to prove its value at the heart of many home-grown blast enclosures. The PRS combines fast-working pressure- blast hardware with a media-reclamation system producing 47" of static pressure.

To recycle media, workers within the booth simply sweep abrasives and debris up a short ramp into a chute. The PRS does the rest. To manage ventilation through the blast booth, Empire's proprietary BVS (shown above at booth rear) draws air through door plenums at the front of the booth, then filters out particulates before discharging air into work place. Other standard features include: double-swing work doors, bright interior lighting and easily accessed electrical controls. Man doors, rubber curtains, rubber flooring and safety equipment join a long list of factory options.

Booth enclosures ship flat to reduce freight costs. Assembly requires no special skills. Bolts pull the panels together and detailed drawings show how. Result: an environmentally compliant, attractively priced and easy-to-install system for stripping large parts - all from Empire, the single source of supply and responsibility.

A complete booth assembly will be available for demonstration on our shop floor in Langhorne through May 2010. Please visit for a first hand inspection. To learn more about our Pre-Engineered blast booths or any Empire product, please contact your local Empire distributor or Empire directly. Our communications links appear below.

Eliminate the Guesswork Out of Cleaning and Peening 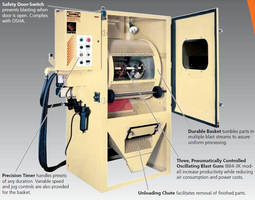 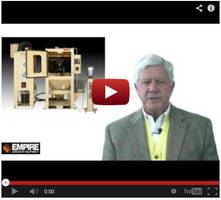 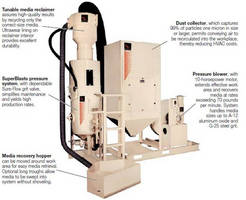 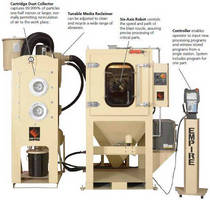