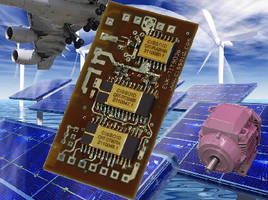 Built from 200Â°C polyimide PCB, EVK-TIT9036 Evaluation Kit is populated with CHT-THEMIS and CHT-ATLAS ICs, which consist of controller and push-pull driver stages of power transistors, respectively. Housed in ceramic packages, ICs operate from -55 to +225Â°C and are designed to drive SiC MOSFETs, JFETs, Silicon IGBTs and MOSFETs, and GaN power switches. Current output is controllable through 2 distinct channels capable of sourcing/sinking up to 4 A total to gate of power transistor.

Mont-Saint-Guibert, Belgium - CISSOID, the leader in high-temperature and high reliability semiconductor solutions released an Evaluation Kit for THEMIS and ATLAS, a power transistor driver chipset specifically designed for motor drives and power converters for applications such as aerospace, renewable energies and electric & hybrid vehicles. The Japanese R&D consortium for Future Power Electronics Technology (FUPET) that includes 22 leading companies (Nissan Motor, Fuji Electric, Sanken Electric and others) and 3 academic sectors in these areas has selected THEMIS-ATLAS for its leading-edge developments around silicon carbide and power conversion.

CHT-THEMIS and CHT-ATLAS integrated circuits are specifically designed to drive seamlessly Silicon Carbide (SiC) MOSFETs, JFETs but also Silicon IGBTs and MOSFETs and Gallium Nitride (GaN) power switches. The new CISSOID chipset can be used either in applications operating in a hot environment, or in systems that will see an increase of the junction temperature due to the power density in the power stage. THEMIS and ATLAS can also be used in lower temperature applications in order to achieve a dramatic increase of the lifetime, with more than an order of magnitude gain compared to traditional solutions. With this new chipset from CISSOID, aeronautic applications such as EMA and EHA-type actuators for X-by-wire, as well as solar inverters, can now reach more than 25 years of lifetime expectancy at 125°C.

CHT-THEMIS and CHT-ATLAS are available in ceramic package forms, guaranteed for operation from -55°C up to +225°C. The Evaluation Board implements one CHT-THEMIS and one CHT-ATLAS integrated circuits, respectively the controller and the push-pull driver stages of the power transistors. The current output is controllable through 2 distinct channels capable of sourcing/sinking up to 4A total to the gate of the power transistor. Depending on the type of power transistor the user implements, this typically translates into a total current capability of up to 150A in the power stage. A complete set of built-in protection features, such as under-voltage lockout, de-saturation detection, soft-shutdown and active Miller clamping are included.

The Evaluation Board is built from a 200°C polyimide PCB, and it is populated with CHT-THEMIS and CHT-ATLAS integrated circuits in ceramic packages guaranteed for -55°C up to +225C. As a result, the board supports short excursions to +200°C~225°C for testing. The Evaluation Kit includes the Evaluation Board, the complete electrical schematic, the Gerber files, the bill of materials and an Application Note.

The Evaluation Kit THEMIS-ATLAS, referenced EVK-TIT9036 is available now, priced at $4,550. The integrated circuits CHT-THEMIS and CHT-ATLAS are available now for sampling and evaluation. Pricing starts at $718.91/chipset up to 200 units in CSOIC ceramic package. The chipset is also available in plastic SOIC package, for maximum temperature of 175°C, under the references CMT-THEMIS and CMT-ATLAS. For more information, visit www.cissoid.com or contact the company's representatives at www.cissoid.com/company/about-us/contacts.html.

FUPET was established in August 2009 for the progress in power semiconductor technology especially using a novel semiconductor material such as SiC. It is conducting two project, "the next Generation Power Electronics" and "the Novel Power Semiconductor for Low Carbon Society," produced and commissioned by New Energy and Industrial Technology Development Organization (NEDO) and Ministry of Economy, Trade and Industry (METI), respectively.

Whether the ambient temperature is low but the power dissipation heats up the chips, or in high temperature environments, CISSOID products enable energy, weight and cost savings in lighter, cooling-free and more compact electronic systems. They are used in mission-critical systems as well as in applications requiring long term reliability. CISSOID supplies leaders in the Oil&Gas, Aeronautics, Industrial and Automotive markets.