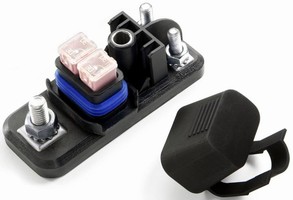 The Power Relay Module, shown below on the left, contains two new female fuse positions and a sealed 70 amp relay (relay is included). One of these fuses protects the relay and the other is a single-circuit inline fuse. It is available with or without an output connector and works with the JCASE cartridge style fuses.

The Power Fuse Module, shown below on the right, holds only 2 fuses - each a separate circuit. A silicone seal and removable cover offer a weather-tight enclosure for the fuse positions. For more information on Waytek's Power Distribution Modules, call (800) 328-2724, or email sales@waytekwire.com. Visit www.waytekwire.com for prices and to request a catalog.

Waytek is also pleased to announce that after nearly 18 years at their current location, they are moving to a new, state-of-the-art facility in mid-April. The new address is as follows: 2440 Galpin Ct., P.O. Box 690, Chanhassen, MN 55317. Phone numbers will remain the same.