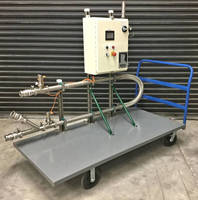 Savannah, GA – Ross SysCon, a full service machine and controls fabrication facility now offers a Portable Pumping System with Static Mixer capable of handling both laminar and turbulent flow applications across a 26-element Low Pressure Drop (LPD) Static Mixer. The system is ideal for continuous inline mixing of minor liquid components into a fluid stream. It produces a homogenous blend within a single pass, despite differences in the viscosity and density of the materials being pumped at a controlled rate. Ross also supplies Static Mixers for emulsification, heat transfer, dilution, pH control, catalyst addition and many other processes.