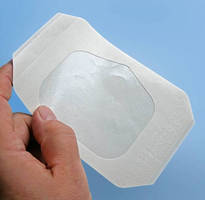 Offering alternative for frame-type wound dressing and surgical drape markets, ArgoMedPLUSÂ® 18411 thermoplastic polyurethane (TPU) film-on-paper product offer optimized peel release values. Product combines ArgoMed 18411 waterproof-breathable, aromatic-polyether, TPU film with 80 lb SCK paper that is coated on one side with polykote and silicone on other. Wound dressings made with this product promote patient comfort via stretch and recovery and moisture-vapor-transmission rates.

Of the many wound bandage designs available today - film, island, frame, and combinations thereof - all except frame-type dressings have enjoyed a wide variety of material choices. One of the greatest challenges to successfully marketing frame dressings has been creating a film product with the correct peel release between the paper and film. (Similar technical challenges and processes are present in surgical drape applications.)

For the past 10 years Argotec has supplied the medical wound care market with ArgoMed® 18411, a highly successful, waterproof-breathable, aromatic-polyether, TPU film on a polyethylene carrier for use in IV-site and other dressing/drape applications. The ultimate challenge in solving the controlled release puzzle was choosing the right paper and modifying the TPU extrusion coating process to control the peel release values between the paper and film so that they are: