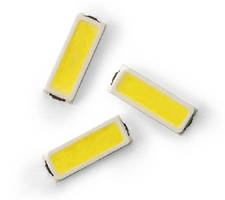 Developed specifically for LED electronic packaging applications that utilize surface mount technology, LavantaÂ® 5115 WH 224 consists ofÂ 15% glass fiber-reinforced polycyclohexylene terephthalate compound, which can be molded at 257Â°F and still maintains 100% crystallinity. Product has high reflectivity of greater than 95% with optimal whiteness retention, even after thermal and light aging. With tensile strength of 11,312 psi and elongation of 1.6%, compound ejects easily from tool.

“This second-generation material is an important achievement because it exceeds the processing requirements of the LED industry, enabling molders to maximize productivity and achieve greater efficiencies,” said Glenn Cupta, global business development manager for electrical/electronics for Solvay Specialty Polymers. “The enhanced processability is achieved without sacrificing the excellent initial whiteness and whiteness retention of the material.”

Cupta noted the growing trend among television manufacturers to use fewer LEDs to reduce cost. This is accomplished by sending higher amperage (current) through the LED, resulting in significantly higher junction temperatures above 100°C (212°F) and greater brightness. Previously used materials are unable to withstand the higher heat and light output, discoloring prematurely in applications such as reflector cups.

Lavanta® 5115 WH 224 is a 15% glass fiber-reinforced polycyclohexylene terephthalate (PCT) compound developed specifically for LED electronic packaging applications that utilize surface mount technology. The injection molding grade provides enhanced processability versus other available PCTs which results in higher yields and shorter cycle times for molders. It can be molded at a lower temperature (125°C/257°F) than competitive PCTs and still maintains 100% of its maximum crystallinity. Cooler molds enable cycle times to be reduced, resulting in lower energy use and reduced cost.

Lavanta® 5115 WH 224 has high reflectivity (greater than 95%) with excellent whiteness retention even after thermal and light aging. This gives it excellent reliability for LEDs that operate at high junction temperatures up to 150°C (302°F). Lavanta® 5115 WH 224 replaces competitive materials including polyphthalamides (PPA) like PA6T and PA9T, which can only operate up to 120°C (248°F). The new PCT grade also has lower moisture absorption and excellent dimensional stability compared to PPA.

The second-generation Lavanta® HPP also boasts strong mechanical properties including tensile strength of 78 MPa (11,312 psi) and elongation of 1.6%. This mechanical performance allows for easy ejection from the tool and improved yields during assembly.

The material is commercially available and being used by key molders in Taiwan and China for television and backlight applications. Solvay plans to expand the Lavanta® HPP product series with an enhanced version with even greater whiteness and whiteness retention while maintaining the excellent processing capabilities.

Lavanta® HPPs are an extension of Solvay’s high-performance polyester line which includes materials like Xydar® liquid crystal polymer (LCP) for electronic components such as connectors.

As an international chemical group, SOLVAY assists industries in finding and implementing ever more responsible and value-creating solutions. Solvay generates 90% of its net sales in activities where it is among the world's top three players. It serves many markets, varying from energy and the environment to automotive and aeronautics or electricity and electronics, with one goal: to raise the performance of its clients and improve society's quality of life. The group is headquartered in Brussels, employs about 29,400 people in 56 countries and generated 9.9 billion euros in net sales in 2013. Solvay SA (SOLB.BE) is listed on NYSE EURONEXT in Brussels and Paris (Bloomberg: SOLB:BB - Reuters: SOLB.BR).