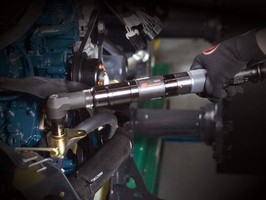 Engineered for industrial and assembly professionals, Series QA6 nutrunners can be used on hard or soft joints including plastics, composites, or metals, and are suited for fastening applications that require precise torque control. They feature ergonomic grips, externally adjustable shut-off clutches, and conveniently located reverse rings. Units run off lube-free motors and are customizable to operator's application in straight and angle configurations.


Annandale, NJ - June 25, 2007 - Ingersoll Rand has extended their nutrunner product line again to include the new QA6 series pneumatic nutrunners. Engineered for industrial and assembly professionals, the QA6 series has a torque range of 15 to 90 Nm and is ideal for critical fastening applications that require precise torque control.

QA6 series nutrunners have maximum torque outputs of 90 Nm and run off lube-free motors. They are easy to maintain and service - which means less downtime - and are fully customizable to the operator's application in both straight and angle configurations.

The third and final addition to the QA family of nutrunners - the QA8 nutrunner - is scheduled for release in late summer and will have a maximum torque output of 225 Nm.